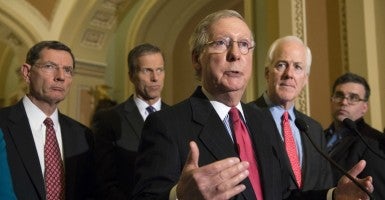 Perhaps they think the country isn’t paying attention to what’s happening on Capitol Hill because everyone is focused on the presidential race. (Photo: Kevin Dietsch/UPI/Newscom)

To watch the recent happenings on Capitol Hill, you would think this was just another typical presidential election year—a few bumps here and there, but no sign of a major shake-up, no indication voters were in revolt, nothing to suggest business as usual in Washington was perhaps falling out of fashion among the American public.

What else explains the lackluster, uninspiring, and, I would suggest, “sell out your base” agenda of GOP congressional leadership?

But at least the GOP is going to put up a fight on government spending, right? No, actually, they aren’t.

For example, the Senate GOP sold out its base on the issue of Common Core this week. Despite the fact Republicans have a majority in the Senate, seven members of the GOP joined a majority of Democrats to confirm President Barack Obama’s nominee, John B. King, Jr. as education secretary. King is an avowed supporter of Common Core and other top-down, government-knows best, education policies.

But at least the GOP is going to put up a fight on government spending, right? No, actually, they aren’t.  Apparently House and Senate leadership have decided the budget deal former House Speaker John Boehner and Obama agreed to last year is such a good one that they will keep it. That’s right, despite the fact Congress passed a Budget Control Act, supposedly to control the budget, Boehner and Obama blew through it, adding another $30 billion. And despite the fact that Boehner’s compliance in this matter is one of the primary reasons he is no longer in Congress, the current leadership is taking the same path. Their reasoning? Obama will fight us if we try to “cut” spending.

Instead of fighting Obama, GOP leadership would rather fight its conservative members who refuse to go along spend along based on promises of future reforms. They apparently believe you’re supposed to try and do what you told voters you would try and do. Ultimately, this means it’s unlikely the GOP will fulfill its promise to pass a budget this year and once again Congress will kick the problem further down the road.

Then there is the ongoing issue of judicial nominations. Republicans ran in 2014 on a platform promising to put a stop wherever possible to Obama’s executive overreach. One way of doing that is putting a halt on Obama’s judicial nominees—especially those for lifetime positions.

While Republican senators, thus far, have committed to not even hold hearings on a new Supreme Court Justice nominee to replace the late Antonin Scalia, their track record is more mixed in the case of several less publicized openings for federal and district level judgeships, also lifetime appointments. Obama nominees, including Wilhelmina Wright who once accused President Ronald Reagan of “bigotry,” were confirmed just last month, and four more are on the Senate Judiciary Committee’s schedule this week.

None of these appointments are necessary to protect the security of the country. A president, who has repeatedly usurped the power of Congress, should not be rewarded by Congress with judges who will no doubt rubber stamp his reckless view of the separation of powers.

All of these areas are issue areas where the GOP could have taken a stronger stand in order to make the case that its policies will make life better for all Americans.

As opposed to approving a nominee who supports Common Core, how about using the opportunity to explain and laud the benefits of more educational choices for parents and children?

As opposed to continuing Washington’s spending spree, why not lay out a budget that would rein in spending and reduce the debt all while keeping our military strong and improving our ability to help those in need? And for those who think such a budget just isn’t doable, check out Heritage’s Blueprint here.

Perhaps they think the country isn’t paying attention to what’s happening on Capitol Hill because everyone is focused on the presidential race.

Considering a recent survey by the American Perceptions Initiative found that 75 percent of Americans agree that “Congress has the responsibility to make sure the president does not skirt the law or overturn the will of the people as reflected in those laws,” a battle over judicial nominations seems like a very good place for the GOP to remind people that Obama, from executive amnesty to rewriting parts of Obamacare, has been doing just that.