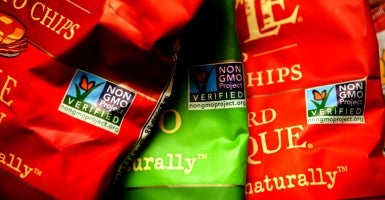 Neither the federal government, nor states, should get in the way of companies voluntarily providing consumers information about genetically engineered food. (Photo: Richard B. Levine/Newscom)

Recently, I wrote in The Hill:

The Senate bill misses the point.

The food industry may benefit by getting this pre-emption and having the government force companies to participate in a “voluntary” program. If there is forced “voluntary” participation or just a straight out mandate, both are requiring the labeling of genetically engineered food. The big problem is information contained in labels (including through bar codes) conveys the misleading information that genetically engineered foods are unsafe.

While the House bill promotes freedom by limiting both government intervention and compulsory speech, and respects sound science, the Senate bill would rush to take action just because industry will soon be faced with Vermont’s labeling law.

The Senate bill is ignoring the voluntary labeling efforts that already exist and the fact that informing consumers that food is genetically engineered only describes the process, not anything about the nutrition or safety of the food.

If a prohibition on mandatory labeling isn’t feasible in the Senate, then the Senate should come back to fight another day.