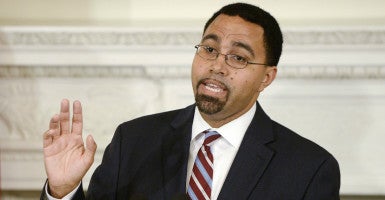 “Do we really think that someone who has spent more time in a government agency than in a classroom is best suited to oversee federal education policy?” Sen. Mike Lee, R-Utah, asked before the 49-40 vote to confirm John King Jr., above, as education secretary. (Photo: Olivier Douliery/CNP/AdMe /SIPA/Newscom)

A total of 11 senators did not vote on King’s confirmation, while those who voted against him cited his loyalty to the system and support for Common Core education standards. King, 41, has been the acting secretary of the Department of Education since January, after Arne Duncan stepped down from the Cabinet post at the end of last year.

“The problem is not that Dr. King lacks experience,” Lee said, adding:

After three years as a teacher and a brief stint managing charter schools, Dr. King has risen through the ranks of the education bureaucracy, climbing from one political appointment to the next.

But do we really think that someone who has spent more time in a government agency than in a classroom is best suited to oversee federal education policy?

The eight Republicans who did not vote were Ted Cruz of Texas, Jeff Flake of Arizona, Mark Kirk of Illinois, John McCain of Arizona, Rob Portman of Ohio, Marco Rubio of Florida, Jeff Sessions of Alabama, and Pat Toomey of Pennsylvania.

The two Democrats who did not vote were Sherrod Brown of Ohio and Mark Warner of Virginia.

Vermont’s Bernie Sanders, an independent, also did not vote.

Only one Democrat, Sen. Kirsten Gillibrand of New York, voted no on King.

Alexander is chairman of the Health, Education, Labor, and Pensions Committee, which last week voted 16-6 in favor of King, sending his nomination to the full Senate.

Alexander said an education secretary needs to be in place to provide proper accountability. He specified implementation of the bipartisan Every Student Succeeds Act, a rewrite of the No Child Left Behind education law.

“We need an education secretary confirmed by and accountable to the United States Senate so that the law fixing No Child Left Behind will be implemented the way Congress wrote it,” Alexander said a statement Monday.

This is such an important year for our nation’s 100,000 public schools. We are working to implement a new law that reverses the trend toward a national school board and restores to those closest to children the responsibility for their well-being and academic success. That’s why, in December, I urged the president to send to the Senate a nominee for education secretary—and I’m glad there’s now someone confirmed and accountable to Congress as we implement this new bipartisan law that represents such a dramatic and important change in direction for federal education policy for 50 million children and 3.4 million teachers in 100,000 public schools.

While there’s only a year left in the Obama presidency, this is still one of the most important jobs in Washington because the Department of Education has a powerful set of tools available that it can use to stand up for people who are struggling with student loan debt and tools to help make a quality, affordable college education a reality of millions of Americans.

Secretary of Ed is one of the toughest jobs, because for yrs @usedgov has put student loan companies & for-profit colleges before students.

“Dr. King has an enormous amount of work to do to get the department’s higher education house in order and the American people will be watching closely for results,” she added.

“No one can question his passion for our nation’s young people,” Murray said in support of King’s nomination on the Senate floor Monday. “This administration has a little less than a year left in office, but that is still plenty of time to make progress in several key areas and that progress is more likely with a confirmed secretary in place at the department.”

Obama announced his intent to nominate King in mid-February, calling him an “accomplished, lifelong educator.”

King has been a public school teacher, a principal, and the co-founder of a charter school.

He served as commissioner of the New York State Education Department from 2011 to 2015. During his tenure, he supervised implementation of the hotly debated Common Core State Standards.

"I am confident that Dr. John King is a strong nominee to transition from Acting Secretary to… position of Secretary of Education" -Murray

Overall, @JohnKingatED has spent his career fighting for students so they get the chance to learn, grow, & thrive in the classroom & beyond.

Look closely at his record—especially the three and a half years he spent as New York’s education commissioner, where he forced on an unwilling school system unpopular Common Core curriculum and standards, an inflexible testing regime, and a flawed teacher evaluation system.

All of this proves that Dr. King is the standard bearer of No Child Left Behind—the discredited K-12 regime that has become synonymous with dysfunctional education policy in classrooms and households across America.

This isn’t just my opinion; it was the opinion of New York’s parents, teachers, legislators, school board members, and superintendents—the vast majority of whom opposed, and protested against, Dr. King and the policies he championed while at the helm of the state’s education department.

In his remarks, Lankford said:

I shared with Dr. King that, in the view of many legal experts and school officials across the country, the Department of Education has been bullying schools to comply with policies that simply do not have the force of law. This use of power, however well intentioned, is wrong, and it’s unlawful. Leadership requires making those sure within the department conduct themselves in full compliance with the law.

I have no choice but to oppose @JohnKingatED's nomination today for Secretary of Education. Watch my floor speech: https://t.co/Iz77iuT3WU

Sen. Richard Burr, R-N.C., who voted “no” in committee and in Monday’s vote, said in a statement last week that King is “clearly the wrong person for the job.”

I urge my colleagues to vote NO on John King. He is the wrong person for Ed Sec job. #StopJohnKing

“We need someone who will listen to teachers and parents,” Burr said, adding:

John King has demonstrated that he is not that person. While serving as state education commissioner in New York, he made education worse by forcing big government Common Core standards on teachers and students, and pushing policies that violated student privacy. In addition to promoting bad policy, King exhibited poor judgment as a manager—knowingly allowing lawbreakers to continue serving in senior positions without penalty.

I cannot support John King's nomination bc of our fundamental difference of opinion on the importance of state & local control of education.

Sen. Tim Scott, R-S.C., also opposed King in committee and in the the full Senate vote.

“I want to thank Dr. John King for his willingness to discuss important issues facing our nation’s education system throughout this process,” Scott said last week in a statement.

“Unfortunately,” Scott said, “his lack of support for critical issues surrounding school choice, such as reauthorizing the D.C. Opportunity Scholarship Program, leave me unable to support his nomination. I am also concerned with his support for Common Core, signaling a willingness to exert more federal control over education.”

We must ensure that every child across this nation has access to a quality education. School choice provides that opportunity, and I sincerely hope that not just Dr. King, but the entire Obama administration, will reconsider their opposition to this critical issue.

Today I voted against the nomination of John King for Sec. of Education b/c he supports #CommonCore & other top-down education policies.

This report was updated to include new quotations and tweets from senators about the King nomination.