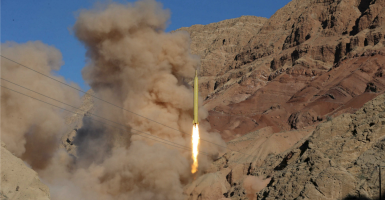 A ballistic missile is launched and tested in an undisclosed location in Iran. (Photo: Tima/Reuters/Newscom)

The Obama administration’s careful reaction to Iran’s latest round of ballistic missile tests showcases the difficult balance the United States and its allies face in deciding how forcefully to push back, without undermining last summer’s nuclear deal.

Tuesday’s and Wednesday’s missile tests conducted by the Islamic Revolutionary Guards Corps of Iran did not violate the nuclear deal, the administration says, although the actions are likely inconsistent with a United Nations Security Council Resolution related to the issue.

That is because, from the beginning, the Obama administration has taken pains to say that the nuclear deal, which went into effect in January, was designed only to restrict Iran’s nuclear program.

The administration argued that Iran’s nuclear capability represented the greatest threat and that getting Iran to give up its ballistic missile program—which Tehran sees as a matter of national defense—and to restrain its involvement in conflicts across the region—was unrealistic.

The distinction matters, critics say, because even if the deal succeeds in containing Iran’s nuclear ambitions for the next 10-15 years, as it’s designed to, the U.S.’s commitment to seeing it succeed means Tehran can always threaten to walk away from the deal if the U.S. punishes too hard.

“In the discussions of whether to proceed with the nuclear deal, the Obama administration said repeatedly this deal is only about nuclear matters,” said Patrick Clawson, who directs the Iran Security Initiative at the Washington Institute for Near East Policy. “The critics of the administration have said it will be afraid to take actions to oppose Iran’s other destabilizing behavior out of concern that Iran may threaten to back out of the nuclear deal.”

While the nuclear deal does not address the ballistic missile issue directly, an annex to the agreement contains a U.N. Security Council resolution that “calls upon” Iran “not to undertake any activity related to ballistic missiles designed to be capable of delivering nuclear weapons, including launches using such ballistic missile technology.”

The Obama administration determined that an earlier round of missile tests by Iran in the fall violated the new resolution and the Treasury Department imposed sanctions against involved individuals and businesses.

Congressional Republicans criticized the administration, however, because it delayed the sanctions until after the nuclear deal went into effect so as not to undermine it.

Former Obama administration officials who were involved with engaging Iran on its nuclear program tell The Daily Signal that the U.S. should act more forcefully now.

“The question is how we respond, because we see missile development as a threat to U.S. allies and U.S. forces in the region,” said Gary Samore, President Barack Obama’s former chief adviser on nuclear policy. “The [previous] sanctions on individuals and groups are pretty hollow. There is a whole range of things I think we should do, and even if these tests do not technically violate the nuclear agreement, we are not inhibited in any way, and we and our allies are perfectly free to do those things.”

Samore called on the U.S. to continue to work with Israel and allies in the Gulf Cooperation Council to develop its own missile defense systems to mitigate the Iranian threat. He said the most likely action will be for the U.S. to act unilaterally to sanction more Iranian individuals and businesses involved with the missile program. More powerful sanctions that could originate from the U.N. Security Council would likely be blocked by members China and Russia, Samore said.

“The security council won’t do anything because China and Russia would oppose action,” Samore said. “It’s not that they are sympathetic to Iran, but they fear it will undermine political support in Iran for the nuclear deal.”

In addition, the Obama administration is unlikely to re-impose sanctions on Iran’s economy and industry that it removed as part of the nuclear deal.

“Sanctions that go farther like economic sanctions, in my opinion, would undermine the implementation of the nuclear deal and won’t change their behavior,” said Richard Nephew, a former State Department official who served as the lead sanctions expert for the U.S. team negotiating with Iran.

Critics say the Obama administration’s attachment to the nuclear deal has enhanced Iran’s military leverage and that Tehran will continue to act nefariously with the U.S. and its allies limited in how they can punch back.

“I didn’t expect them to include the missile issue in the nuclear deal, because if they did, Israel’s missiles would have to be included, but I think it was a huge mistake to relax the U.N. sanctions on ballistic missiles,” said Jim Phillips, a Middle East expert at The Heritage Foundation. “I think the Iranians are right: They can ignore calls for restraint because this is a toothless resolution the administration agreed to put in place.”

Nephew and Samore defended the administration’s handling of the ballistic missile issue and downplayed the significance of the recent launches.

“There is this idea that the missile program is only significant now, and that’s nonsense,” Nephew said. “It’s been a problem under Reagan, both Bushes, Clinton, and Obama. The fact Obama didn’t take care of the missile program as well as the nuclear program means sometimes diplomacy has limits imposed by who you are doing diplomacy with. At some point, we have to bear in mind that while we had a lot of power and leverage from our sanctions regime, we did not have the power to get Iran to unilaterally disarm [its ballistic missile program]. We just didn’t.”

Samore said he worries more about “concessions” he said the Obama administration made on the nuclear deal itself, including the fact that the restrictions on Iran’s nuclear program expire after 10 or 15 years.

“I don’t care as much about the ballistic issue loophole, as much as the areas where we made concessions in the nuclear area to get a deal,” Samore said.

As long as the Obama administration remains in office, its commitment to the nuclear deal won’t change, and Iran will likely continue to test that investment by misbehaving.

What happens after a new president is elected remains an open question, Samore said.

“The next administration may not feel so committed to upholding the spirit of the agreement,” Samore said. “If the Iranians continue to misbehave, which they will, I can imagine the next administration looking to re-impose economic sanctions that were lifted. Then the Iranians have to decide if they honor the agreement or not. You can imagine a dynamic that leads to the collapse of the deal next year.”