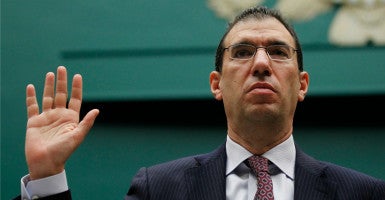 Centers for Medicare and Medicaid Services Acting Administrator Andy Slavitt testified before the Senate Permanent Subcommittee on Investigations on the failure of 12 co-ops started under Obamacare. Slavitt's testimony came after the subcommittee released a report saying the Obama administration ignored warnings from Deloitte Consulting on the 12 co-ops that ultimately closed their doors. (Photo: Jason Reed/Reuters/Newscom)

The Obama administration ignored warnings from a private consulting firm about the viability of nonprofit insurance companies created under Obamacare, which could ultimately cost the taxpayers $1.2 billion doled out in loans to 12 of the insurers.

According to the study from Republicans on the Senate Permanent Subcommittee on Investigations, Deloitte Consulting evaluated loan applications and business plans submitted by a dozen now defunct co-ops and expressed concerns about their financial future.

The company, hired to evaluate the co-ops’ business plans and loan applications, specifically pointed to issues with the financial forecasts submitted by the nonprofit insurance companies. The consulting firm’s warnings were ignored by the Department of Health and Human Services, according to the subcommittee’s report.

“These failed co-ops were a costly experiment gone wrong, and real people got hurt, including the more than 700,000 Americans who lost their health plans,” Sen. Rob Portman, chairman of the subcommittee, said today at a hearing on the co-ops.

The Department of Health and Human Services approved $1.2 billion in startup and solvency loans for the 12 consumer-operated and oriented plans eventually approved by both Deloitte and the Obama administration.

The majority of the loans are unlikely to be recovered, the report found.

In total, the Department of Health and Human Services signed off on the creation of 23 co-ops, which received $2.4 billion in loans.

At the hearing, Andy Slavitt, acting administrator for the Centers for Medicare and Medicaid Services, defended his agency’s decision to allow the co-ops to open and function.

“The team, I think, did the best job they could at evaluating the information they had, but three, six months into a co-op being off the ground, the startup … I find it very difficult to criticize them with the exception of CoOportunity for not closing those, for letting those co-ops move forward into the 2015 open enrollment year,” Slavitt told lawmakers.

Though nearly two dozen co-ops were originally created and approved, Republican members of the Senate Permanent Subcommittee of Investigations examined Deloitte’s analysis for the 12 co-ops that failed.

Of those co-ops that have gone under, Deloitte identified issues with the enrollment strategy of seven. Such issues determined by the consulting firm included inadequate statistical analysis and inadequate knowledge of the customers each of those co-ops was looking to enroll.

Deloitte also found that 10 of the 12 failed co-ops had incomplete budgets that, among other issues, were misaligned with their own financial projections.

The subcommittee’s report specifically criticized the co-ops that launched in Colorado, Utah, and Louisiana, all of which relied on “unrealistic” projections for their growth.

Deloitte’s warnings to the federal government regarding the co-ops were not confined to enrollment and budget proposals.

The consulting firm flagged issues with the leadership of all 12 failed co-ops. According to the report Deloitte sent the Department of Health and Human Services, which the subcommittee examined, several of the co-ops seeking approval from the Obama administration failed to identify members of their senior leadership teams, while others listed top officials who had “red flags” turn up in their background checks.

Louisiana’s co-op received $65.7 million from the Centers for Medicare and Medicaid Services and closed its doors in July 2015.

Questions surrounding the management of the 12 failed co-ops is not new. In November, The Daily Signal found that the officials holding the top leadership positions for 11 of the 12 co-ops that shuttered made an average of $245,000 per year.

In addition to the Obama administration’s decision not to heed the warnings from Deloitte, the report from the Permanent Subcommittee on Investigations found that the Department of Health and Human Services waited until 2015 to enhance its oversight of the co-ops that had financial issues in 2014.

A Daily Signal analysis from February 2015 found that 22 of the 23 co-ops created lost money the previous year. Just one, Maine’s Community Health Options, was profitable.

“The co-op loan agreements armed HHS with significant accountability tools for borrowers who were missing the mark, but here HHS took a pass,” the report from the subcommittee said.

It wasn’t until September 2015 that the Obama administration decided to place five of the 12 now closed co-ops on corrective action. By the end of 2015, all 12 had shuttered.

“That failure is difficult to understand,” the subcommittee said in its investigation.

Not only did nearly all of the co-ops lose money in 2014, but 10 of the 12 shuttered co-ops missed enrollment projections, which led to substantial losses.

“HHS was aware of these problems in early 2014, but took no corrective action and continued to disburse loans to the distressed co-ops,” the report said.

Slavitt, though, said that the issues the co-ops faced were not confined to the nonprofit insurers entering the health insurance market. Instead, he said, many of the challenges they met are faced by any startup.

“The challenges the co-ops have had should not be viewed as a co-op problem, but as a small business, start-up problem within a very difficult industry,” he said. “I have to just say that all of the small companies experience similar challenges, co-op or non-co-op.”

Of the 12 co-ops that failed, CoOportunity Health was the first to close its doors, doing so in early 2015. The nonprofit insurer received $145.3 million in loans from the Centers for Medicare and Medicaid Services.

During a Senate Permanent Subcommittee on Investigations hearing today, Sen. Ben Sasse, R-Neb., questioned Slavitt on why his agency allowed the co-op to sell plans to consumers despite their financial troubles.

“Obviously, the kind of situation in Nebraska and Iowa is not the kind of situation we want to be in,” Slavitt told Sasse. “And I will say, to be fair, as I look back about things we could have done differently, I will say that CoOportunity should never have been allowed to go into the 2015 year, either by the co-op or by ourselves. And I think that’s a very fair criticism in looking back.”

As a result of CoOportunity’s closure, more than 80,000 of its customers were forced to purchase new coverage to avoid a lapse.

“I’m not looking for villains,” Sasse said during the hearing today. “I’m thinking we need to acknowledge the utter incompetence of trying to plan a program like this. I’m not asserting that anyone here is evilly motivated, but whether or not anyone is competent to oversee this program. I haven’t seen any evidence of that yet.”