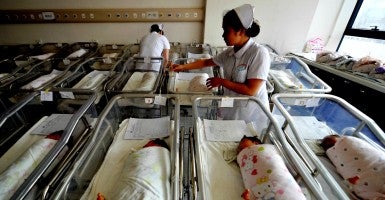 We should not forget to speak for those who cannot speak for themselves. (Photo: Chen Bin Xinhua News Agency/Newscom)

China currently has a population made up of an estimated 33 million more men than women.

China currently has a population made up of an estimated 33 million more men than women. In fact, 2015 Chinese census data estimates that there are close to 116 boys born for every 100 girls.

China’s sex ratio imbalance is almost entirely due to the Chinese government’s population control policies. Mitigating factors such as Chinese cultural preference for boys and the reality that in old age, there is only one child to care for two parents lead many Chinese families to abort baby girls in favor of boys. But ultimately, in China, government meddling in family matters is why forced abortion, which has led to the sex ratio imbalance, occurs in the first place.

Today, some experts have touted the change to a two-child policy as a significant divergence from past practice. Chinese officials expect the rollback of the one-child policy to result in an additional 3 million births annually, increasing Chinese births from a little over 16 million to just below 20 million each year. But even so, the two-child policy will add fewer additional births than the modification made to the policy in 2013.

Beyond the limited gains in fertility, the transition to a two-child policy won’t fix the sex ratio imbalance. Historical analyses of birth rates in areas where China already tacitly implemented a two-child policy found a disturbing trend: a significantly skewed sex ratio for second, third, and higher-order births.

While the policy most prominently impacts women—depriving baby girls of life, subjecting women to forced sterilization and forced abortion, and exacerbating social phenomena including human trafficking and mail-order brides—it is not solely a women’s issue.

The devaluation of women under the one- and two-child polices is a result of the failure to acknowledge the importance of human life. And it has led to irreversible negative societal impacts.

As a direct result of the one-child policy, China’s annual projected GDP growth rate will likely decline from 7.2 percent in 2013 to around 6.1 percent by 2020. And the sex ratio imbalance has led to a phenomenon known as “bare branches,” which refers to the notion that Chinese men are increasingly violent, restless, and unable to find wives.

The devaluation of human life, of women in China, is an issue that entire societies, men and women alike, should care about.

We should not forget to speak for those who cannot speak for themselves. For the unborn baby boys and girls of China, and for the mothers forced to abort their own children, we call for an end to China’s draconian population control policy.