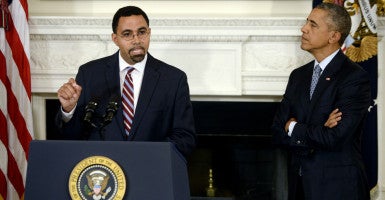 Despite opposition from former educators, school boards, and public officials for his “blind commitment” to Common Core, a Senate panel Wednesday voted in favor of confirming John King Jr. to serve as the secretary of education through the end of President Barack Obama’s term.

Obama nominated King, who currently serves as acting secretary, last month. He would succeed Arne Duncan, who stepped down from the post in December 2015, and tapped King to serve as his second-in-command early last year.

Sen. Lamar Alexander, chairman of the Senate HELP Committee, praised his members for approving the new Department of Education head, who will be tasked with overseeing the implementation of the latest iteration of No Child Left Behind.

“I urged the president to sent the Senate a nominee for education secretary, and after today’s vote, we are a step closer to having a confirmed secretary who will be accountable to Congress as we work together to ensure the new law is implemented just as Congress wrote it—reversing the trend toward a national school board and restoring to those closest to children the responsibility for their well-being and academic success,” Alexander, R-Tenn., said in a statement.

Six lawmakers on the Senate HELP Committee opposed King’s nomination Wednesday, including Sen. Richard Burr, R-N.C., who explained his decision to oppose King in a series of posts on his Twitter account.

I voted against John King’s nomination for Secretary of Education because he is clearly the wrong person for the job. #StopJohnKing

We need someone who will listen to teachers and parents. John King has demonstrated that he is not that person. #StopJohnKing

King exhibited poor judgement as a manager. He allowed lawbreakers to continue serving in Sr. positions without penalty #StopJohnKing

Despite the few senators on the Senate HELP Committee who opposed King, his appointment has not been met without controversy.

During confirmation hearings last week, neither Republicans nor Democrats asked King a single question on his tenure with the New York State Education Department, of which he served as commissioner from 2011 to 2015.

The Washington Post described the absence of such questions as an “astounding pass” the committee gave to King.

King’s time as commissioner has been described as a period of “turmoil,” particularly because of his “blind commitment” to Common Core and other programs reforming education in New York.

Under King’s leadership as commissioner, close to 65,000 students in New York opted out of the state’s Common Core tests in 2014. The number of students opting out climbed to more than 200,000 in 2015.

Carol Burris, an award-winning principal in New York and executive director of the Network for Public Education, called King an “unapologetic proponent of Common Core, student data collection, and Common Core testing” and criticized the former New York education commissioner for failing to address concerns from parents and teachers, alike, while instead choosing to promote the Common Core curriculum they took issue with.

“The profiles being published focus on [King’s] personal biography, which is compelling,” Burris wrote last month of his media coverage. “Yet his leadership during the three and a half years he served as New York’s Commissioner of Education is far more revealing to how he will lead the U.S. Department of Education. That story should not be ignored.”

Prior to the Senate HELP Committee’s approval of King, school boards in New York passed resolutions opposing his confirmation.

“We cannot help but conclude that amplifying Dr. King’s abject failure as the leader of the educational establishment in New York state to the federal level is good for no one,” the Board of Education of the Patchogue-Medford Union Free School District on Long Island wrote in its resolution.

The resolution specifically criticized King for his implementation of both No Child Left Behind and Common Core—a “total failure”—as well as his unresponsiveness to input from parents and teachers.

“John King’s tenure as the Commissioner of Education in New York State culminated in disaster for our schools,” Al Graf, a Republican who represents Holbrook, N.Y., said last month. “His lack of experience in the classroom led to policies that resulted in the near destruction of public education in New York State. He was unqualified and unfit to hold the reins in New York. Why is the federal government now trying to impose his type of failed leadership on education for the entire country?”

Reflecting on objections to Obama’s nomination of King despite strong calls for him to be opposed, Mary Clare Reim, a research associate in education policy at The Heritage Foundation, stressed that King’s views differ from those of parents nationwide.

“During Dr. King’s tenure as Commissioner of Education in New York, parents were so vocal in their objection to the Common Core roll out that he was forced to cancel many public forums. Parents and teachers alike called for his resignation,” she told The Daily Signal. “Dr. King’s strong support for national standards does not represent the views of American parents who overwhelmingly do not support Common Core.”

Back in Washington, D.C., the conservative group Heritage Action for America, the sister organization of The Heritage Foundation, re-upped its calls for Congress to stop confirming the president’s nominees.

“Given the Obama administration’s disregard for Congress’s role in our constitutional system of government, the Senate should refuse to confirm the president’s nominees unless those nominees are directly related to our national security,” the group said in a January memo.

In his announcement nominating King to serve as acting secretary of education, Obama praised King as an “exceptionally talented educator.”

The son of New York public school educators, King’s parents died when he was 12, and he praises his public school teachers in New York City for saving his life because of the educational experiences they gave him, as well as hope for his future.

King earned degrees from Harvard, Yale, and Columbia; served as a teacher and principal; and founded a charter school before he was appointed deputy commissioner of the New York State Education Department in 2009.

He became commissioner in 2011.