Kanye West Isn’t the Only One With a Spending Problem 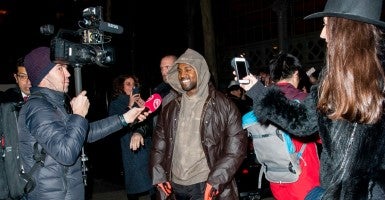 If Kanye West’s personal finances have you worried, take a closer look at the federal budget.

When West announced in February that he was $53 million in personal debt, he took to Twitter to ask for help from his followers, specifically soliciting $1 billion from Facebook founder Mark Zuckerberg.

Most Americans can’t turn to the Internet to fix financial mistakes. Instead, families work hard to save and spend responsibly so that they are not overcome with debt. Unfortunately, the federal government seems to operate within West’s economic ideology—spend what you can, and keep asking for more.

The 2016 national budget will spend all of the nation’s tax revenues and then some creating massive deficits. Unless Congress reforms the budget process and reins in spending, deficits will continue to rise for the foreseeable future. In 10 years, more than $9 trillion in federal deficits will pile onto the already fourteen figure national debt. The magnitude of these poor budgeting choices is hard to grasp for many of us who will never have to worry about overstepping trillion-dollar debt limits. Yet spending and budgeting in Congress has major implications for American families and should be understood by more people.

So let’s imagine, for one wildly irresponsible moment, that the average American family in 2015 spent and borrowed as the federal government does. If a typical American family ran their household how the federal government spends taxpayer dollars, they would spend their entire yearly income without saving a cent and then put $7,000 on their credit card.

On top of that, this family would be $260,000 in debt. Mind you, this is simply debt, not a mortgage or business investment. Neither would this family have a plan to pay off its debt.

Put in that light, it’s obvious that federal spending and borrowing habits are irresponsible and unsustainable.

Large and growing deficits and debts are a result of out-of-control spending. Congress should prioritize among various budgetary needs and eliminate unnecessary spending just as their constituents have to.

Cutting expenses at any budgeting level—whether it is deciding to eat at home more often instead of in restaurants, or to focus federal entitlement benefits on those individuals who need support the most—is tough and can be unpopular at times. But it is critical.

When government spends and borrows beyond its means, our national debt soars. With high national debt, the growth of the U.S. economy and private sector slows. This slow growth hurts job creation and American incomes.

To rectify this problem the federal budget should adopt a path to balance. The Heritage Foundation’s “Blueprint for Balance” provides detailed recommendations for Congress to adopt this path. Heritage’s Blueprint reduces spending, reforms entitlements, and takes immediate steps to reduce the national debt—all while reducing taxes and adequately prioritizing funding for national defense.

While the parallels between a household budget and the federal budget are not exact, the underlying principle of fiscal responsibility is universal. Budgets should prioritize among competing spending needs, limit borrowing, and aim for balance.