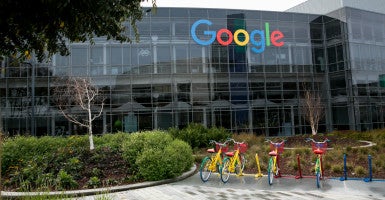 Major corporations, including Google and Twitter, are coalescing in opposition to legislation in Georgia that would protect the right of individuals and institutions to practice their religion.

Part of the state legislation prevents clergy from being required to perform same-sex marriages if doing so violates their religious beliefs. The state House and Senate last month passed the bill, H.B. 757, and the Senate version is back before the House.

“[The bill] would ensure that no state agency discriminates against individuals or institutions for following their convictions about marriage as a man-woman union by revoking, for example, their nonprofit tax-exempt status or denying them government grants, contracts, accreditation, or licenses,” Heritage Foundation scholar Ryan T. Anderson wrote for The Daily Signal.

More than 400 businesses in Georgia have joined a coalition called “Georgia Prospers” to fight what advocates call a religious liberty bill protecting First Amendment rights and what opponents characterize as an attempt to legalize discrimination against same-sex couples.

In doing so, the companies have sided with LGBT activists—seeking what they consider the rights of lesbian, gay, bisexual, and transgender residents—who are aligned against the legislation.

“We believe that treating all Georgians and visitors fairly is essential to maintaining Georgia’s strong brand as the premier home for talented workers, growing businesses, entrepreneurial innovation, and a thriving travel and tourism industry,” Ronnie Chance, Georgia Prospers head, wrote in a piece for The Atlanta Journal-Constitution.

Chance, former Republican majority leader of the state Senate, added of the legislation: “While proponents see it as reaffirming the First Amendment, many others see it as a license to discriminate against certain groups of Americans.”

“We’re welcoming to everyone, regardless of one’s age, race, religion, gender, sexual orientation, or gender identity,” the coalition’s website says.

Also on the list: Girl Scouts of Greater Atlanta.

We agree with the Atlanta Chamber of Commerce on keeping Georgia a great place to do business. #HB757 https://t.co/8q9uZKxPUf

“This is yet another example of cultural cronyism,” Anderson, Heritage’s William E. Simon senior research fellow in American principles and public policy, wrote. He added:

Businesses in Georgia were always free to embrace gay marriage—to bake wedding cakes for gay marriages and make floral arrangements for same-sex nuptials—and many do, but now they want the government to force everyone in Georgia to do the same.

Full support @Benioff . Great leadership once more in standing up for what is right. https://t.co/He4lKU3B7a

Another business in the coalition, telecom startup 373K Inc., announced it would move out of the state due to the legislation.

Marc Benioff, CEO of tech giant Salesforce, another business in the coalition, asked Twitter followers whether his business should move out of Georgia:

In Indiana last year, Benioff fought a similar bill. After the state legislature passed it, Salesforce canceled all events and programs that would require their customers and employees to travel to the state.

“It started in Indiana, where my employees drove us into the issue,” Benioff told Forbes. “We had no prior experience dealing with conflict in local legislatures trying to pass these ‘liberty’ bills. We got our experience there and won. And I’m confident we will win in Georgia.”

Greg will someone ask him about the support salesforce lends to countries where actual anti-gay laws are in place? https://t.co/DtsKxCrerP

“It’s important to note that Salesforce does business in Singapore and India,” McKoon said last month from the well of the Senate, adding:

The laws of Singapore and India are that they make homosexuality a crime punishable by imprisonment. It appears he [Benioff] has absolutely no problem doing business in and making money from countries where homosexuality is a crime. So let’s spare us all the political antics around this issue.