What Many Small Businesses Call Their Biggest Challenge 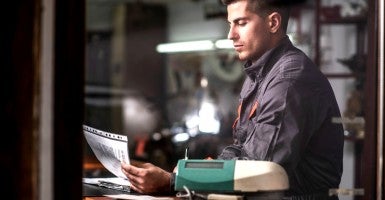 Participants in the 2015 survey ranked government regulations as more problematic than credit availability, cash flow, the cost of running a business, taxes, or other problems. (Photo: istockphoto) Twenty-two percent of small businesses with annual revenues over $10 million identified compliance with government regulations as the biggest challenge they faced over the past 12 months. That’s up from only four percent in a similar but smaller survey last year.

Participants in the 2015 survey ranked government regulations as more problematic than credit availability, cash flow, the cost of running a business, taxes, and other problems.

For an overview of how government regulations continue to climb, see The Heritage Foundation’s “Red Tape Rising: Six Years of Escalating Regulation Under Obama.”