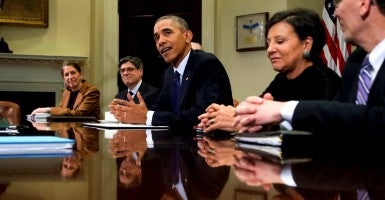 Now, more than ever, the president's statement has proven to be blatantly false (Photo: Michael Reynolds/EPA/Newscom)

Speaking from the White House Rose Garden on July 15, 2012, President Barack Obama promised the American people about his new Deferred Action for Childhood Arrivals (DACA) program, “Now, let’s be clear—this is not amnesty; this is not immunity. This is not a path to citizenship.”

Now, more than ever, the president’s statement has proven to be blatantly false.

Shortly after Obama first announced his DACA program, the Legal Action Center of the American Immigration Council published a “practice advisory” alerting immigration lawyers to a legal loophole that could be exploited to turn an illegal immigrant’s DACA status into a green card and eventually citizenship.

The statute says the federal government can grant advance parole only on a case-by-case basis and only for “urgent humanitarian reasons” or “significant public benefit.” But after Obama announced his Deferred Action for Childhood Arrivals program, the United States Citizenship Services office announced that for DACA recipients, “significant public benefit” now included “educational purposes, employment purposes, or humanitarian purposes.”

Later, U.S. Citizenship and Immigration Services guidance added that “educational purposes include, but are not limited to, semester abroad programs or academic research.” This means that a DACA recipient who came to the country illegally could now apply for advance parole, travel home to Mexico for a “semester abroad,” and then legally re-enter the United States.

Voilà. Thanks to DACA and Obama’s advance parole loophole, such semester-abroad studying DACA recipients have magically changed from illegal to legal immigrants. They are now on a path to citizenship.

It is unclear how many illegal immigrants have taken advantage of this program so far. According to a 2015 Department of Homeland Security (DHS) report to the House Judiciary Committee, 4,566 DACA recipients had been granted advance parole status at that time. And word is spreading. California newspapers are reporting that professors across the state are bringing more and more students across the border to Mexico and back, just so they can take advantage of this loophole.

This week, Senate Judiciary Committee Chairman Chuck Grassley, R-Iowa, and I wrote a letter to DHS Secretary Jeh Johnson demanding answers—specifically, how many DACA recipients have received advance parole, how many have been paroled back into the United States, and how many have tried to adjust their immigration status after they have re-entered.