How Much Are Obamacare Deductibles Up in Your State? 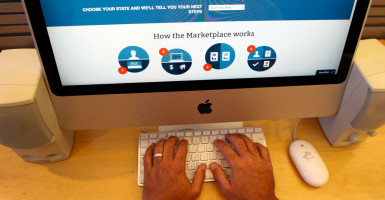 A total of 41 states face an average increase in Obamacare deductibles this year. (Mike Segar /Reuters/Newscom)

Americans across the country are paying higher health care deductibles under Obamacare.

Freedom Partners, a nonprofit dedicated to protecting freedom and expanding opportunity, released an analysis of data tracking the weighted average of 2016 Obamacare deductibles in all 50 states.

A total of 41 states saw an average increase in deductibles.

“Higher Obamacare deductibles increase, by hundreds of dollars, what families must pay out of pocket to access their health insurance,” Nathan Nascimento, senior policy adviser at Freedom Partners, said in a prepared statement. “Instead of reducing costs, Obamacare regulations and mandates continue to drive up these costs and make quality care less accessible for hardworking families.”

Deductibles, separate from insurance premiums paid to an insurer, are the amount a consumer owes for health care services before health insurance coverage kicks in. For example, a $1,000 deductible means that under some health care plans, the insurer will not pay for covered services until the consumer has paid that $1,000 out-of-pocket cost.

Americans in 17 states face deductibles increasing by double-digit percentages. In many states, deductible costs are now $3,000 or more.

Freedom Partners analyzed gold, silver, and bronze plans under Obamacare, formally called the Affordable Care Act. Deductibles across these levels in the Obamacare health exchanges increased this year at an average of 8.4 percent (or $265). Some states saw increases over $1,000.

“Deductibles increasing in the exchanges is expected, as we have observed already that deductibles have been increasing at a vigorous rate in the majority of insurance markets,” Drew Gonshorowski, a senior policy analyst in the Center for Data Analysis at The Heritage Foundation, told The Daily Signal.

The average general annual deductible among all covered workers on employer-sponsored health insurance in 2015 was $1,077 for single coverage, compared to $303 in 2006, according to a survey from the Kaiser Family Foundation and the Health Research and Educational Trust.

The same survey found that since 2010, deductibles for all workers have increased by 67 percent, almost three times as fast as premiums and about seven times as fast as wages and inflation.

In Obamacare marketplace plans with combined medical and prescription drug deductibles, sold to individuals in the 38 states that are facilitated through the federal marketplace, an average medical deductible in 2016 for gold plans is $1,247, for silver plans $3,064 (up from $2,556), and $5,765 for bronze plans (up from $5,328), according to analysis from Kaiser.

The District of Columbia and the states of Illinois, New Mexico, Oklahoma, Oregon, and Texas were the only jurisdictions to see an average decrease in deductible costs across Obamacare health plans.

Other states saw a decrease in deductibles in some of their plans but had an overall average increase.

Premiums under Obamacare also increased this year. A premium increase tracker by Freedom Partners found that premiums for individual health care plans in all 50 states increased by an average of 14.9 percent this year.

“After enduring double-digit premium increases and canceled plans under the Affordable Care Act, surging out-of-pocket costs—specifically deductibles—are making it difficult for Americans across the country to access the health care plans they were mandated to purchase,” Freedom Partners says.