Why Are Higher Education Subsidies Going Toward Lazy River Rides? 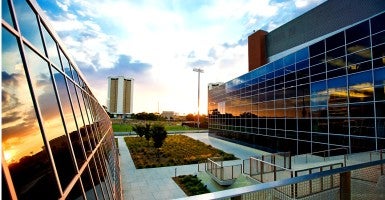 There’s no doubt students appreciate the opportunity to stay in shape while in college, but these amenities come at significant costs to taxpayers and the students themselves. (Photo: Photographer / Flickr / CC BY-NC-ND 2.0)

Navigating life after college can be tricky for new graduates. Students are struggling to pay off debt and many recent graduates find their degrees don’t guarantee a job in their preferred field. The debt many students are incurring—more than $30,000 for the typical graduate—appears to be underwriting luxurious living at some universities.

Although this list isn’t representative of most universities, here are just a few examples of the amenities available at some institutions:

And here’s the kicker,

There’s no doubt students appreciate the opportunity to stay in shape while in college, but these amenities come at significant costs to taxpayers and the students themselves. One of many problems with virtually unlimited student loans is that the borrower doesn’t always internalize the cost of college, and becomes less sensitive to price increases. As college costs soar, students take out loans with little thought given to their repayment four (or in many cases six) years down the road.

Although the subsidies are concentrated to the students who qualify for them, increases in tuition are passed along to all students who attend a school. Inflated tuition costs may price out students who don’t qualify for subsidies and would prefer to pay for academics, but are forced to underwrite Xbox tournaments and wilderness yoga.

To restore the integrity of higher education and refocus on its educational purpose, Congress should rein-in federal subsidies and enable a market of financing options to thrive.