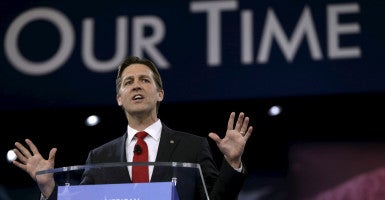 Sen. Ben Sasse, R-Neb., believes that the country is in a time of “constitutional crisis,” and he served up a history lesson at the annual Conservative Political Action Conference on the founding fathers and the roots of American exceptionalism and conservatism.

Sasse, who has emerged as one of the Senate’s most conservative voices since taking office in 2015, devoted his CPAC speech Thursday to America’s founding.

He stressed the need for conference attendees to place the American idea ahead of their policy preferences and political affiliations. Here are seven quotes from his remarks:

Running through Saturday, CPAC offers conservatives across the country an opportunity to gather with fellow activists and leaders for speeches, panels, exhibits, and other activities at Gaylord National Resort and Convention Center, just outside Washington, D.C., at Maryland’s National Harbor.