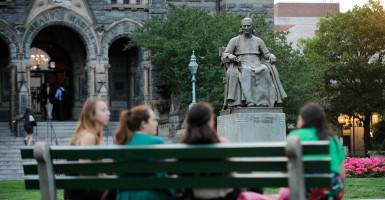 “Colleges and universities across the country need to be reminded of their obligation not just to permit, but to protect, the vital free exchange of ideas,” student Alex Atkins said. (Jonathan Ernst/Reuters/Newscom)

Universities point to the tax code as an excuse to suppress free speech on campuses across the United States, an education rights group told a House panel.

Students, professors, and others, testifying Wednesday before the House Ways and Means Subcommittee on Oversight, said college officials often are reluctant to eliminate “microaggression” policies and allow free speech for fear they will lose tax breaks.

Campus activists define microaggressions as actions or comments that unintentionally offend or discriminate against minority groups.

Alex Atkins, a second-year student at Georgetown University Law Center, told the House panel that the university stopped him and other students from campaigning on campus for Sen. Bernie Sanders, I-Vt.

Atkins said administrators prevented the activity, saying the school’s status as a tax-exempt nonprofit limited the ability of Atkins and his group to use campus resources for partisan political activity.

Georgetown University denied Atkins’ request in September 2015 to reserve a table to campaign for Sanders. The next month, it forced his group to stop canvassing on school grounds to attract students to a debate watch party.

Atkins said administrators told him his group was violating campus policy, pointing to Georgetown Law’s 501(c)(3) exemptions under the tax code. They said the IRS required the university to restrict students from using campus resources, including space, to express political views, Atkins testified.

Lawyers for the Foundation for Individual Rights in Education, a nonprofit civil liberties watchdog, last month wrote a letter to Georgetown Law’s dean on behalf of Atkins’ group, charging that the school misinformed students about the law’s restrictions.

“Despite the seeming severity of the restrictions on political activity at private colleges and universities imposed by the requirements of section 501(c)(3) … it is extremely important to note that these prohibitions apply to the institution itself … not to individual students, faculty, or staff engaged in clearly individual, unaffiliated activity,” the lawyers wrote.

While Georgetown is moving to revise its policies in response to the letter, Atkins said, the university’s actions hindered his group’s ability to campaign earlier in the election season. The student testified:

These changes cannot undo the nearly six months that we lost—six months where all we wanted to do was engage in the type of basic civic expression long considered emblematic of America’s educational campuses.

Colleges and universities across the country need to be reminded of their obligation not just to permit, but to protect, the vital free exchange of ideas.

Catherine Sevcenko, associate director of litigation at the Foundation for Individual Rights in Education, testified that the practice of private and public schools pointing to their tax-exempt status as justification for policies that silence speech is a growing bipartisan issue.

“[Colleges] were granted tax-exempt status because they have an educational mission,” Sevcenko told the subcommittee. “I think it’s deeply ironic that the universities, in an attempt to preserve their 501(c)(3) status, are in fact censoring people, censoring students, which is undermining the very purpose that they’re there for.”

Of the 450 colleges and university policies studied by her organization, Sevcenko said, 50 percent have unconstitutional speech codes.

Modesto Junior College in California, for example, blocked Army veteran Robert Van Tuinen from handing out copies of the Constitution to classmates on Constitution Day two years ago.

A campus security guard told Van Tuinen that if he wanted to express himself in public, he had to sign up for the school’s free speech zone, which wasn’t available until the next month.

But Sevcenko said legal action is time-consuming and expensive, often meaning that students remain censored for extended periods of time.

The Internal Revenue Service, she said, needs to clarify its guidance on political activity restrictions for 501(c)(3) organizations so that free speech on school grounds is properly protected.

“Confusion over the IRS guidelines is a likely cause of this censorship,” Sevcenko said. “General counsels are not going to allow political activity that they fear would endanger the school’s tax-exempt status. As long as the IRS guidance is ambiguous, censorship will win out every time.”