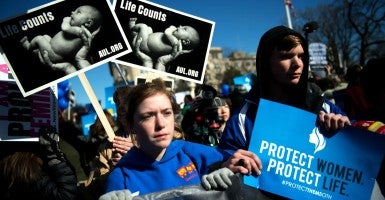 The justices would do well to uphold Texas’s reasonable law and reconsider the long, deadly shadow that its abortion decisions have cast over American law, medicine, and society. (Photo: Shawn Thew/EPA/Newscom)

Wednesday, while a huge crowd of protesters stood in front of the U.S. Supreme Court building, the justices heard oral argument in the first major abortion case in nearly a decade.

The law requires abortion clinic doctors to have admitting privileges at a hospital within 30 miles of the clinic and clinics to meet the minimum health and safety standards that other ambulatory surgical centers have to meet.

Here are five key exchanges from the oral argument:

Several of the justices pressed Stephanie Toti, the lawyer representing the abortion doctors and clinics, for evidence showing that the law has had an impact on clinics, causing their closure.

Justice Samuel Alito pointed out that in a similar case in Louisiana, the challengers included specific data on the number of abortions being performed and the capacity of each clinic. He wanted to know why Toti had not produced the same individual evidence on the relatively small number of abortion clinics that had closed.

Alito referred to an article in the Huffington Post that said that one of the clinics the plaintiff claimed closed due to the Texas law had actually closed due to a reduction in state funding, which had nothing to do with H.B. 2.

When Toti protested that that article wasn’t in the record, Alito pointed out that she had lots of items in her brief that were not in the record. In fact, Alito asked, wasn’t it true that at least three new clinics that meet the health and safety standards had opened up since the law passed? Toti couldn’t deny that.

While defending H.B. 2, Texas Solicitor General Scott Keller received some harsh questioning from several of the liberal justices, particularly Justices Sonia Sotomayor and Ruth Bader Ginsburg, who seemed shocked that Texas had passed a law requiring abortion clinics to meet the same standards as other ambulatory surgical centers or requiring their doctors to meet the professional standards of doctors admitted to practice in hospitals.

Justice Stephen Breyer also lectured Keller on various aspects of the case. But when Keller attempted to discuss the value of requiring admitting privileges, pointing out that the National Abortion Federation had made that same recommendation in 2000 (before it changed its mind), Breyer cut him off. Breyer acknowledged that he was not questioning the intent of the legislature in passing this statute; it was clearly done to advance the safety and health of women.

He was, however, concerned about the manner the state chose to advance those interests. Thus, Breyer’s line of questioning suggests that there may not be four votes in favor of the plaintiffs’ claim that the Texas legislators’ ulterior motive in passing this law was to close down abortion clinics, not improve the safety of clinics.

At one point, Justice Anthony Kennedy asked Toti whether the Court should remand the case back to the lower court for more fact-finding. Kennedy is considered the key vote in this case, and he seemed somewhat hesitant at today’s argument.

At the end of Toti’s time at the podium (and after Chief Justice John Roberts had already given her additional time), Justice Sonia Sotomayor continued asking a question even after Roberts said, “Thank you, counsel,” which is the traditional manner in which the chief lets the lawyer know that her time has ended.

U.S. Solicitor General Don Verrilli, who had divided argument time with Toti, spoke second. He argued that if Texas’ law goes into effect, the remaining clinics will not be able to meet the increased demand of new patients if other clinics close. But as Alito noted, the plaintiffs hadn’t provided any evidence on that point, so the Supreme Court shouldn’t speculate about that.

Several of the justices today did not seem to want to hear about the complications that can arise from abortions, including hemorrhage, infection, uterine perforation, anesthesia complications, and other problems that can lead to hysterectomies or death, which show why this law is necessary.

Sotomayor claimed that the Gosnell clinic was clearly an outlier, but Alito jumped in to note that one of the amicus curiae “friend of the Court” briefs that was filed in the case described “appalling violations” at plaintiff Whole Woman’s facilities, including “[h]oles in the floor—where rats could come in, the lack of any equipment to adequately sterilize instruments.” Suddenly Gosnell’s “house of horrors” didn’t sound like such an outlier.

>>>To Read More on This Topic: “How Gosnell’s Abortion ‘House of Horrors’ Led to This Week’s Supreme Court Case”

As Texas has shown, admitting privilege are important for women’s health and safety because otherwise a patient who experiences complications following an abortion will arrive at an emergency room without the doctor who actually performed the abortion. This leaves the emergency room physician with no access to her medical records, her history, or information about the procedure.

All this increases the likelihood of medical errors and harm to the patient. The admitting privileges requirement also ensures rigorous scrutiny of a doctor’s professional qualifications and surgical skills.

The same is true of requiring abortion clinics to meet the minimum standards set for other ambulatory surgical centers. These requirements improve the quality of care that women receive.

Opportunity to Ensure Health and Safety

In the more than 40 years since the Supreme Court invented a constitutional right to abortion, the abortion industry has evaded and fought commonsense regulations at every step. The result has been horrors like those found in the Gosnell clinic, which for years harmed women and killed children born alive.

The Supreme Court now has an opportunity to confirm that states have a legitimate interest in ensuring the safety and health of women who enter abortion clinics. The essence of the argument made by the plaintiffs in this case and all of their amici is that the ability of abortion clinics to remain open—even under substandard conditions—should outweigh the state’s ability to put women’s health and safety first.

The justices would do well to uphold Texas’ reasonable law and reconsider the long, deadly shadow that its abortion decisions have cast over American law, medicine, and society.