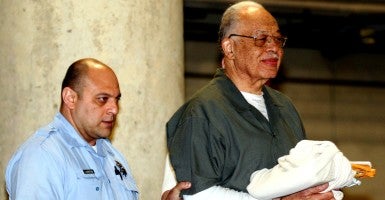 The Supreme Court will hear oral argument in Whole Woman’s Health v. Hellerstedt this week, a case challenging a Texas law that requires the abortion industry to follow commonsense health and safety regulations.

Passage of the Texas bill was spurred by the discovery of Dr. Kermit Gosnell, the now infamous late-term abortionist who ran a filthy “House of Horrors” in Philadelphia before he was convicted of murder.

The details of that case help explain why Texas (and other states) are requiring abortion facilities to meet the same basic cleanliness, safety, and staffing requirements as similar outpatient surgery facilities and ensuring that doctors performing abortions can admit and care for patients in a hospital if something goes wrong.

On May 13, 2013, just a few weeks before the Texas legislature would pass H.B. 2, a Philadelphia jury convicted late-term abortionist Gosnell of first-degree murder of three infants born alive after botched abortions and involuntary manslaughter in the death of 41-year-old Karnamaya Mongar.

The almost 300-page grand jury report published in 2011 describes Gosnell as someone who, “under the pretext of providing medical care, routinely killed viable babies and irreparably damaged women.”

The grand jury report describes Gosnell’s clinic as a “wretched, filthy space,” where “[d]irty facilities; unsanitary instruments; an absence of functioning monitoring and resuscitation equipment; the use of cheap, but dangerous, drugs; illegal procedures; and inadequate emergency access for when things inevitably went wrong, all put patients at grave risk—every day.”

In addition to outdated equipment, “[s]uction tubing, which was used for abortion procedures—and doubled as the only available suction source for resuscitation—was corroded.” Prosecutors noted that the facility was marked by “blood-splattered floors, and blood-stained chairs in which patients waited for and then recovered from abortions.”

Many of Gosnell’s staff were “unlicensed and untrained” in the work they performed on mostly low-income women in Philadelphia, including a then-15-year-old girl who sometimes assisted in abortion procedures and administered prescription drugs to patients.

The Death of Karnamaya Mongar

Gosnell’s lack of concern for his patients, woefully inadequate staff, dangerous facility, and illegal use of prescription drugs came to a head in the tragic death of Karnamaya Mongar, a recent immigrant to the United States.

On Nov. 19, 2009, Mongar was given large and repeated doses of multiple sedative drugs in preparation for a late-term abortion procedure at Gosnell’s clinic. A few hours after first being administered the drugs, staff noticed that she was unresponsive but did not call 911.

Mongar’s medical file was not handed to emergency responders upon request, but was allegedly modified to obscure how much medication had been administered and later brought to the hospital by one of Gosnell’s staff.

Gosnell failed to provide life-saving drugs and delayed calling 911 without any justification. When paramedics finally arrived, they attempted to resuscitate Mongar and take her to a hospital. But, as the grand jury report details, Mongar’s “slim chances of survival were seriously hampered because it was exceedingly difficult for responders to get her to the waiting ambulance. The emergency exit was locked. … After cutting the locks, responders had to waste precious more minutes trying to maneuver through the narrow cramped hallways that could not accommodate a stretcher.”

Mongar’s medical file was not handed to emergency responders upon request, but was allegedly modified to obscure how much medication had been administered and later brought to the hospital by one of Gosnell’s staffers. The next day, Karnamaya Mongar was officially pronounced dead. The medical examiner noted that the cardiac arrest that led to her death happened “because somebody gave her a Demerol overdose.”

Many other women who made it out of Gosnell’s facility alive were either injured or exposed to infectious diseases because of the clinic’s unsanitary conditions and incompetent staff. Remarkably, state agencies charged with protecting health and safety had failed to inspect Gosnell’s operation for 17 years, despite numerous complaints.

Gosnell’s Unsafe Practices Are Not Unique, and Neither Is Karnamaya’s Wrongful Death

Sadly, while Gosnell is perhaps one of the worst offenders, many of his unsafe practices are not outliers in the abortion industry. As Denise Burke, vice president of Americans United for Life, explains: “[o]ver just the last six years, more than 170 abortion providers in 30 states have faced investigations, criminal charges, administrative complaints, and civil lawsuits or have been cited for violating state laws governing the provision of abortion.” Some of those lawsuits, investigations, and criminal charges stemmed from women who lost their lives at the hands of an unscrupulous abortion industry.

For instance, in 2012, Tonya Reaves, a 24-year-old mother of a toddler, bled to death following a second-trimester abortion procedure and after the Chicago Planned Parenthood clinic’s staff reportedly waited over five hours before transferring Tonya to a hospital.

In 2010, 22-year-old Laura Hope Smith died during an abortion procedure in Massachusetts. The clinic reportedly did not have the equipment to monitor vital signs, and the staff (including the abortion doctor) lacked certification in CPR.

In 2013, Jennifer Morbelli, a 29-year-old teacher, died from complications of a late-term abortion procedure in Maryland by LeRoy Carhart, who had allegedly left town shortly after the procedure and was unreachable when Morbelli suffered emergency complications that led to her death.

The Need to Increase Health and Safety Standards

In light of the disturbing evidence, the grand jury in the Gosnell case specifically recommended that Pennsylvania elevate the safety and cleanliness standards for abortion facilities to those of other outpatient surgical facilities:

If oversight agencies expect to prevent future Gosnells, they must find the fortitude to enact and enforce the necessary regulations. Rules must be more than words on paper. We recommend that the Pennsylvania Department of Health plug the hole it has created for abortion clinics. They should be explicitly regulated as ambulatory surgical facilities, so that they are inspected annually and held to the same standards as all other outpatient procedure centers.

Since 2011, Pennsylvania and at least five other states, including Texas, have passed laws requiring abortion clinics to meet the same health and safety standards as ambulatory surgical facilities. More than a dozen require doctors performing abortions to have admitting privileges at a local hospital.

The Texas law and others like it are reasonable and necessary. Yet many of these laws could be in jeopardy should the Supreme Court block states’ ability to continue appropriately regulating abortion facilities and providers.

All Americans, on either side of the abortion debate, should support elevating the health and safety of women, and the Supreme Court should recognize state’s legitimate interests in doing so.