The Left’s Embrace of Authoritarian Policies to Achieve ‘Equality’ 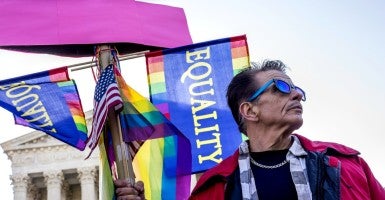 An advocate for same sex marriage in front of the U.S. Supreme Court as the court heard oral arguments in the case Obergefell v. Hodges. (Photo: Pete Marovich/UPI/Newscom)

There are few ideas today that seize the minds of liberals more than equality. It is the central tenet of progressive liberalism. It drives practically everything liberals do and believe in, from income equality to marriage equality. We usually think about the problem as an economist or sociologist would—as in whether everyone has the same income or enjoys the same social status.

What is it about how liberals think of equality that makes them so prone to recommend authoritarian policies to achieve it—confiscatory tax policies, campus speech codes, fining pastors, and the like?

As I explain in my forthcoming book, “The Closing of the Liberal Mind,” it has a lot to do with how they frame the issue. In short, they assume (at least theoretically) that any variation in how human beings fare in society, no matter how small, is more often than not an injustice. People who make less money than others are victims of economic oppression, not just people who may be willing to work less.

If a young boy suffers from gender dysphoria and wants to be treated as a girl, he is supposedly being treated unequally if a school system won’t let him enter a girl’s bathroom. Same-sex couples who don’t get legal recognition of their unions as marriages are said to be treated unequally, even though the real issue isn’t equality, but rather, as the Supreme Court ruling in Obergefell v. Hodges made clear, a gay couple’s self-perception of dignity.

The first things you notice about this approach to equality are the aggressive means to achieve it. Money must be taken from some people and given to others.

You can’t force a boy into a girl’s bathroom with nice words. You need a court order. And you can’t overturn a millennia-old definition of marriage without making a fundamental change, by the majority stroke of a single Supreme Court Justice’s pen, to the Constitution.

The coercion is built into the absolute nature of the demands. We are talking about making a cultural revolution here, and nothing short of breaking lots of eggs to make the new progressive omelet is required.

I don’t use the word “authoritarian” lightly, because it has the connotation of using force. But that is the mindset of these people. Try refusing to participate in a same-sex marriage ceremony, and watch the fines and court orders mount.

Try, as Ben Shapiro did, to deliver a talk at Cal State Los Angeles about how multiculturalism threatens free speech, and watch as activists block the event and the university’s president tries to cancel it. Both instances involve official coercion, and they arise from an authoritarian mindset—one in which legal force and public shaming rituals are used to suppress dissent.

The second thing you notice is that the individual human being completely disappears. No single person is responsible for anything (unless, of course, you are a banker or conservative free speech advocate).

He or she is just an object of society, a victim, or at best a rarefied “construct” of some class, gender, or sexual preference. Morality is defined not by what we do as individual human beings, but by our political attitudes and ideology.

Do we advocate same-sex marriage and an expanded welfare state? Check, we are “good” people. Do we question these things? Check, we are bad and must be not merely opposed, but shut out of the debate.

There’s no room for dissenters, because the new morality dictates that being a good person depends on politics, not personal behavior.

Different Is Treated as the Same

Third, the progressive concept of equality depends on a total pretense. We must pretend that things that are inherently different must be treated as exactly the same.

For example, marriage has been understood for millennia as a union between and a man and a woman. To treat a same-sex couple as the equal of the traditional couple, we not only have to redefine the nature of marriage. We also have to pretend as if two very different things were the same.

The relationships between a man and a woman on the one hand, and between two people of the same gender on the other, are obviously two very different kinds of relationships, biologically and even socially. They are factually not the same things, but we must pretend as if they were. By shifting the criterion for “marriage” equality from having children to being “in love,” we have not only blurred these differences. We are now saying that the law must treat two different kinds of relationships as identical.

King hated stereotyping of any kind, and when he said he had a dream “where [black people] will not be judged by the color of their skin, but by the content of their character,” he was making a universal claim that blacks are as individuals not at all different from white people. Their right to equality is based on their rights as individuals. He was not making any claims about black people’s group identity or demanding that blacks be treated differently; rather, he was demanding that they should be given the same exact political (read: civil) rights as whites.

King’s original vision of equality was perfectly in sync with how the Founding Fathers viewed equality. It was, as a matter of fact, taken directly from the Declaration of Independence. Its author, Thomas Jefferson, wanted a constitutional government that treats everyone equally before the law and protects the individual’s rights of everyone equally. That is what they meant by equality. Jefferson and other Founders understood instinctively that any form of government that promises to level all the social and economic conditions of society will result in authoritarian government. It’s inescapable.

The progressive approach to equality has a name. It’s called radical egalitarianism—the belief that all social and economic differences between people must be erased. As an idea, it has inspired leftist politics for centuries, from socialism to communism. But it is not an idea with which most Americans have historically been comfortable.

Until recently, that is. There it is now, front and center, in the contemporary politics of progressive liberalism. In fact, it is safe to say that it is now the dominant ideology of American liberalism.

Economic inequality today is less about poor people losing out than about the middle class getting squeezed between an expanding welfare state that demands more taxes from them and a rising elite of very wealthy people who can afford the higher taxes.

One thing is for sure: As the government and the courts try to force people to accept the new values of radical multicultural state, ever more authoritarian methods will be have to be used.

We can step back from the new authoritarianism, but only if we understand the flawed nature of how its advocates view the politics of human relations.