How a New Liberal Supreme Court Justice Would Change America 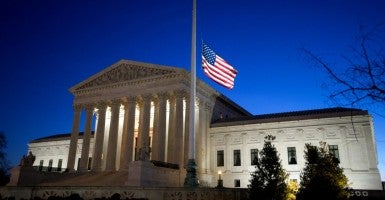 The more the Supreme Court reaches out and grabs power it isn’t entitled to hold, the more it legislates from the bench. (Photo: Michael Reynolds/EPA/Newscom)

It’s another day, and another tantrum from Sen. Harry Reid, D-Nev. But it doesn’t matter how much he jumps up and down and stomps his feet—we aren’t going to let the far left get away with denying the American people the opportunity to be heard.

As the American people continue voting during the presidential election, they face a choice. Do they want yet another justice who will look to her “heart” and apply her own ethics and perspectives when deciding important constitutional questions that impact every American? Or do they want a justice who, like Justice Scalia, adheres to the Constitution and the rule of law and decides cases based on wherever the text takes him?

We can’t overstate how critical it is for the American people to understand what’s at stake in this debate. Today, I want to talk a little bit about the impact these two different visions would have on everyday Americans.

Many leading Supreme Court observers believe that adding yet another liberal justice to the court, whose decisions are unmoored from the constitutional text, would lead to major changes in the court’s jurisprudence.

As a recent New York Times article put it, adding another liberal to the Supreme Court “would be the most consequential ideological shift on the court … creating a liberal majority that would almost certainly reshape American law and American life.”

It will impact all of us.

According to that same article, a host of Supreme Court precedents on free speech, freedom of religion, the right to keep and bear arms, the death penalty, and abortion would be overturned.

In that same article, one law school dean noted that with another liberal on the court, “the judicial debate over the fundamental possibility of Obamacare would likely draw to an end.”

So let’s consider just a few of the Supreme Court precedents that would likely be overturned with another liberal justice on the court.

First and foremost, it’s our Second Amendment rights that would fall squarely within the liberals’ sights. The Heller decision, authored by Justice Scalia, recognized, based on the intent of the Framers, that the Second Amendment guarantees an individual constitutional right to gun ownership.

Again, as one law professor noted in the New York Times, with another liberal on the court:

“The five would narrow Heller to the point of irrelevancy.” Another said, “If we got a fifth liberal on the court, the pendulum would swing pretty quickly on gun control…I expect that we’d see a major shift in the kind of gun control laws that get approved by the court.”

In other words, Heller and the individual constitutional rights it guarantees would be turned into a relic. It would be an ornament without any practical limiting effect on government infringements on gun ownership. Once this happens, all bets are off on the right to keep and bear arms.

Next, the First Amendment right of the American people to make their voices heard would be drastically curtailed when the court overturned Citizens United. In fact, as a University of Chicago law school professor said in the New York Times, “Citizens United is on every liberal’s list of opinions that ought to go.”

Freedom of religion protections under the First Amendment wouldn’t be far behind.

Another liberal justice could allow the government to force Americans to comply with laws that violate their deeply held religious beliefs. For example, a new justice could provide the fifth vote to overturn the recent Hobby Lobby decision, which recognized the right of the owners of a closely held corporations to resist laws on religious grounds, such as Obamacare’s contraception mandate.

We all know, of course, that free speech protections are being eroded and diluted in this country. On college campuses across the country, speech isn’t being protected because of the speaker’s viewpoint. Rather than debate openly with opponents, as Scalia always did, too many people today want to shut down debate and muzzle those who disagree with them.

What other rights are at stake in this election?

Incredibly important precedent under the First Amendment’s establishment clause would be at risk. I’m talking about Supreme Court cases allowing prayer at town hall meetings, or permitting low-income parents to receive public school vouchers to defray the cost of a child’s private school, including religious schools.

And of course, while yet another liberal justice would read narrowly the First and Second Amendments that are in the Constitution, he or she would read broadly those “rights” that are not in the Constitution at all. If yet another liberal is nominated to the court, even reasonable restrictions on abortion—enacted into law through the democratic process—would be swept away.

Just a few years ago, the Supreme Court upheld the ban on partial-birth abortion by a 5-4 vote, in a case called Carhart. Partial-birth abortion is the horrific practice that crushes an unborn baby’s skull, killing it while its head is still in the womb. It’s one very small step short of infanticide.

If the American people elect a liberal during this presidential election, and that president nominates another liberal to replace Scalia, we can all expect a constitutional right to abortion on demand, without limitation.

In the words of one law professor, “[a]t-risk precedents run from campaign finance to commerce, from race to religion, and they include some signature Scalia projects, such as the Second Amendment[.] … Some would go quickly, like Citizens United, and some would go slower…but they’ll go.”

That leads me to a broader point. There’s more at stake than the results in any particular case, as important as those cases are.

The American people need to consider whether they want their next justice to decide cases based on the text of the Constitution as it was understood at the time it was adopted, or whether Justices are free to update that document according to their own moral and political philosophies.

Or should they do legal backflips to reach their desired public policy goals?

This second approach, of course, is not law. Instead, it’s what Scalia memorably called “legalistic argle-bargle” and “jiggery-pokery.”

Scalia knew that the rule of law is a “law of rules.” The rule of law is not “a law of whatever is in the Justice’s ‘heart.’” When a justice believes, as President Obama does, that any time he views the Constitution as unclear, he can apply his own “life experiences” and “empathy” for his or her favorite causes, the justice has a clear incentive to think that the Constitution is unclear.

But a justice isn’t entitled to read those views into the Constitution and impose them on the American people. Our Constitution sets up a republic, not government by judiciary. Unless the Constitution specifically prohibits the democratic process from reflecting the will of the people, the decisions are made by elected individuals who are accountable to the voters.

The Supreme Court plays an important role in keeping the branches of the federal government within their constitutional powers, and in keeping the federal and state governments within their constitutional spheres. And it ensures that the government complies with the Bill of Rights. That’s the basis for its legitimacy. But when the court reads the Constitution in ways that reflect the Justices’ personal policy views, rather than the text, it does not act legitimately. Instead, it denies the people the legal right to govern themselves.

Scalia understood this better than anyone.

The more the Supreme Court reaches out and grabs power it isn’t entitled to hold, the more it legislates from the bench, the more decisions it robs from the American people.

As a direct result, step by step and inch by inch, liberty is lost. And as John Adams observed, “Liberty, once lost, is lost forever.”

Since the days of the Warren court, this is what liberal justices have done. Under the guise of constitutional interpretation, they have imposed liberalism on the people. They’ve done it on issues, and in ways, that they couldn’t achieve through the ballot box.

This is the decision facing the American people during this presidential election.

Anyone who cares about these important issues should take note.