The Inconvenient Facts the Media Ignore About Climate Change 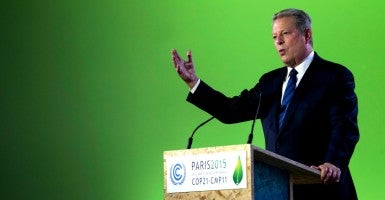 Americans in large numbers are turning off TV newscasts, canceling subscriptions to newspapers, and seeking other sources of news. Distrust of the national media has hit an all-time high.

A recent Pew Research Center survey found that 65 percent of Americans believe that the national news media have a negative effect on our country.

According to a recent Gallup poll, six in ten Americans now have little or no confidence in the national media to report the news fully, accurately, and fairly. A recent Pew Research Center survey found that 65 percent of Americans believe that the national news media have a negative effect on our country.

Americans are frustrated because they know that many of the “news stories” they read are only opinion columns in disguise. If the story does not fit the liberal worldview, then facts are ignored, dissent is silenced, and Americans are told what to think. Perhaps one of the worst examples of one-sided, biased reporting involves global warming.

Those who reject the liberal viewpoint that climate change is the greatest threat to our country are ridiculed and ignored. For example, the Associated Press recently amended its stylebook to recommend that those who question the science behind global warming be called climate change “doubters” instead of “skeptics.” But this is inaccurate, since many “skeptics” don’t doubt that climate change has occurred.

Liberal groups continue to attempt to silence debate. The repeated claims that “the debate is over” and that “97 percent of scientists agree that human-caused global warming is real” are false and mislead the public. In testimony before the Science Committee, a lead author of the United Nation’s Intergovernmental Panel on Climate Change stated that the 97 percent estimate “just crumbles when you touch it.”

The source of this “97 percent” myth is a discredited study that attempted to categorize scholarly articles on climate change by the position the papers took on the issue. But most of the papers never took a position on climate change at all. This has not stopped the liberal national media from touting this illegitimate statistic.

Silencing debate is contrary to the scientific method. If these groups were confident about their arguments, they would welcome more debate to test their theories. However, some media outlets, such as the Los Angeles Times, have changed their policies and no longer accept letters to the editor from those who question human-made climate change. That this would happen in a democracy where free speech is enshrined in the Constitution is unbelievable.

Scientists who are not alarmists agree that climate change is a complex subject with many variables. But the liberal national media instead chooses to focus on human contributions and usually fails to provide both sides.

For example, the national media hyped NASA’s finding that 2014 was the hottest year on record. Ignored was the footnote that revealed that NASA was only 38 percent certain this was accurate. Less than fifty-fifty. Americans would have been better served by a coin toss.

Too often, these alarmist announcements are based on manipulations of existing data. And when Congress or independent researchers question federal agencies about the data, they are criticized as “attacking scientists.”

Particularly regrettable is that the National Oceanic and Atmospheric Administration (NOAA) fails to include all relevant data sources in its monthly temperature news releases. Atmospheric satellite data, considered by many to be the most reliable, has clearly showed no warming for the past two decades. This fact is well documented, but it does not fit the liberal politics of the administration or the national media.

Americans deserve all the facts that surround climate change, not just those that the national media want to promote.

NOAA also published a controversial study last year where scientists altered global surface temperature data and widely publicized their results as refuting the two-decade pause in global warming. This week, a new peer-reviewed study was published in the journal Nature that, according to one of the authors, shows “reduced rates of surface warming” and “essentially refutes” NOAA’s study. Shouldn’t the media acknowledge that their alarmist headlines are based on incomplete information?

Americans will continue to distrust the liberal national media until the media provide objective coverage of the news. Americans deserve all the facts that surround climate change, not just those that the national media want to promote.