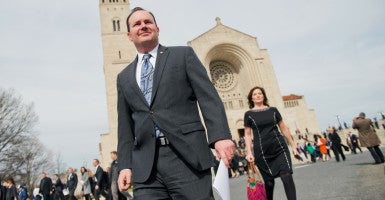 Sen. Mike Lee, R-Utah, believes the fight over the next Supreme Court justice may prompt Senate leaders to move on criminal justice reform legislation this year to show that Republicans can work in a bipartisan fashion. (Photo: Tom Williams/CQ Roll Call/Newscom)

Sen. Mike Lee believes that the Senate fight over the next Supreme Court nominee will help the chances of a criminal justice reform overhaul passing Congress this year.

In an interview with The Daily Signal, Lee, a conservative leader on the issue, suggested that Republican leaders may be more eager to achieve a bipartisan deal on criminal justice reform because it would show that the Senate can be productive even while the GOP holds up the next Supreme Court nominee.

“If the question is if this could actually help its chances, the answer is yes,” said Lee, R-Utah. “We in the Senate naturally want to find areas where there is significant bipartisan agreement, and this is one of them. The fact we disagree in some areas makes it much more important for us to pass bills like the Sentencing Reform and Corrections Act, and in that respect, it makes it more likely we will.”

“There still is very strong bipartisan support for this effort, and that’s not going to evaporate simply because we have a strong disagreement when it comes to the Supreme Court vacancy,” Lee continued.

Lee and the other authors of the Senate Judiciary Committee’s reform legislation have lately been on the defensive about their proposal, which is thought to be one of the few areas where Congress and President Barack Obama can work together to enact a significant law this year.

Recently, presidential candidates and some conservative critics have argued that the Senate proposal would allow violent convicted felons the chance to be released from prison early.

“It would be very dangerous and unwise to proceed with the Senate Judiciary bill, which would lead to the release of thousands of violent felons,” Sen. Tom Cotton, R-Ark., of the Judiciary Committee told Politico in January.

The bill’s defenders have fought that characterization.

The bill aims to reduce certain mandatory minimum prison sentences created in the 1980s and ’90s during the war on drugs.

With the federal prison system facing severe overcrowding, the bill is meant to shorten sentences for low-level nonviolent drug offenders and to allow well behaved inmates to earn time off their prison terms.

The sentencing reform bill easily passed the Judiciary Committee last fall, but it has not made it to the Senate floor yet.

Before the full chamber votes on the bill, in an effort to win over critics, senators are preparing changes to the legislation.

>>>Why Proponents Are Struggling to Salvage Bipartisan Criminal Justice Reform

Under the original legislation, some felons who had three violent or serious drug offenses, and then were found guilty of possessing a firearm, would face a 10-year mandatory minimum sentence, rather than 15 years as required under current law.

In addition, the original Senate bill reduces the length of the mandatory minimum sentence for people who have been convicted of possessing a firearm while committing a violent or drug trafficking crime. Current inmates punished under that sentence could have applied retroactively for a shorter sentence.

The bill’s authors are now aiming to change this section of the legislation so that current inmates convicted of possessing a firearm during the commission of a violent crime cannot apply for relief retroactively.

According to a fact-check by the Washington Post, as the bill is originally written, there are 3,433 inmates in the two sections that include people who may have been convicted of a violent felony who could be eligible for resentencing. A federal judge would make the final decision on whether to release somebody early.

Lee told The Daily Signal that the senators have not finalized the changes to these two sections yet.

He said he’s “confident” the modifications will help win the support of members who had concerns.

But on the other side, some advocates have worried that the proposed modifications would limit the impact of the legislation, in that it would do little to address the mass incarceration problem occurring in the nation’s federal prisons.

While acknowledging that he’s “very frustrated” by skeptical lawmakers from his own party who have attempted to kill the criminal justice reform legislation, Lee insists that his legislation will remain meaningful.

“It’s very much solid criminal justice reform,” Lee said. “We don’t operate in a vacuum, and we have to take into account concerns expressed by members. Of course, I have been very frustrated [by pushback], but it’s unfortunately not entirely unheard of for that kind of thing to occur in a legislative process.”

Senate Majority Leader Mitch McConnell, R-Ky., has so far declined to say whether he’d bring the sentencing reform legislation to the floor this year, and Lee said he doesn’t know if the leader’s commitment on the issue has changed.

In the House, meanwhile, Speaker Paul Ryan, R-Wis., has said criminal justice reform will come up for a vote in his chamber this year. The House Judiciary Committee has already passed a series of bills dealing with the issue.

Though he doesn’t know for sure what McConnell will decide, Lee is optimistic that the proposed changes to the Senate bill will heal the divisions around it, and that the Supreme Court vacancy fight will only enhance the urgency to act.

And in the worst case—if presidential politics get in the way of passing something this year, when the momentum around criminal justice reform is particularly strong—Lee promises to not let up on a matter he sees as fundamentally about fairness.

“First of all, I want this to pass, I hope it will pass, and I expect it to pass,” Lee said. “I don’t want to concede anything on that point as far as that happening. But if somehow this were not to pass, this issue is not going away, and I am not walking away from it.”