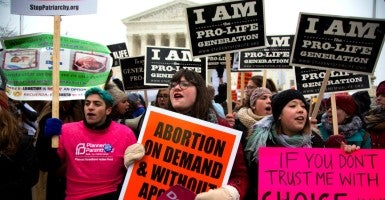 The 43rd Annual "March for Life" in front of the Supreme Court in Washington D.C. on Jan. 22. (Photo: Jeff Malet Photography/Newscom)

On Wednesday, the Supreme Court will hear oral argument in the first major abortion case in nearly a decade.

In the case Whole Woman’s Health v. Hellerstedt, the Supreme Court will consider whether Texas’ H.B. 2 law—a commonsense reform intended to increase women’s health and safety—meets the test laid out in prior cases.

Texas passed H.B. 2 in 2013 to ensure that women are not subject to substandard conditions or practices at abortion clinics that could jeopardize their health and even lives. This came on the heels of Philadelphia abortion doctor Kermit Gosnell’s murder trial—which brought to light dangerous and unsanitary conditions at his clinic.

The Texas law requires abortion clinic doctors to have admitting privileges at a hospital within 30 miles of the clinic and clinics to meet the minimum health and safety standards that other ambulatory surgical centers have to meet. These include standards for the operation of a facility (including requirements to ensure quality of care, facility cleanliness and safety, adequate staffing, and safe pathology and medical laboratory services, among others) and fire prevention and safety, among others.

When the Texas legislature considered passing this law, it heard testimony from numerous medical professionals about the benefits of admitting privileges and ambulatory surgical center standards, as well as the serious complications that can result from abortion. One doctor testified that these requirements “keep the patients safe” and that “simple things like physical plant requirements to have a generator in case the power goes out [and] CPR training” are essential in the event of complications. Texas points out that the Supreme Court upheld a stricter ambulatory surgical center requirement in Simopoulos v. Virginia (1983), “recognizing that it furthered the legitimate state interest in ensuring patient health.”

Texas also argues that the challengers are trying to “upend” the undue burden test and turn the courts into “medical board[s] with powers to approve or disapprove medical and operative practices and standards throughout the United States,” thereby overriding legislative determinations.

Though some abortion clinics may close because they are either unable or unwilling to meet the ambulatory surgical centers requirements, that does not transform the law into an undue burden. As the Supreme Court explained in Planned Parenthood of Southeastern Pennsylvania v. Casey (1992), the fact a law might make it more difficult or more expensive to obtain an abortion does not mean it is per se an undue burden.

Moreover, as Texas notes, “an abortion clinic will remain operational in each metropolitan area where petitioners allege one would close if the Court affirms. … Over 90% of Texas women of reproductive age will live within 150 miles of an operational abortion clinic.” Thus, the challengers cannot show that these provisions impose an undue burden “in a large fraction of cases,” which would be necessary for the Supreme Court to facially invalidate the law.

In the more than 40 years since the Supreme Court invented a constitutional right to abortion, the abortion industry has evaded and fought commonsense regulations at every step. The result has been horrors like those found in the Gosnell clinic, which, for years, due to lack of regulation and oversight, harmed women and killed children born alive.

The Supreme Court now has an opportunity to confirm that states have a legitimate interest in ensuring the safety and health of women who enter abortion clinics. The justices would do well to uphold Texas’ reasonable law and reconsider the long, deadly shadow that its abortion decisions have cast over American law, medicine, and society.