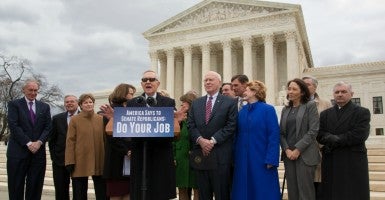 Democrats led by Minority Leader Harry Reid, D-Nev., rally Thursday in front of the Supreme Court to protest the Republican blockade of any Obama nominee to the Supreme Court. (Photo: Jeff Malet.MaletPhoto)

From the steps of the Supreme Court, Senate Democrats unleashed their latest messaging barrage in the battle over whether President Obama should fill the open seat of the late Justice Antonin Scalia.

Sounding incredulous, Reid responded to the characterization by telling Grassley and Senate Republicans to “do your job. That’s all we ask.”

“A childish tantrum?” Reid said of Grassley’s crack. “When we’re asking him to do his job? He’s chairman of the committee. He should hold committee hearings [and] report people out.”

The Judiciary Committee scrutinizes presidential nominees for federal judgeships, including the Supreme Court, then votes on whether they move on to a vote on the Senate floor.

Senate Republicans continue a regular drumbeat that Scalia’s seat should remain open for the next president to fill after the November election. On Tuesday, the 10 other Republicans on the Judiciary Committee joined Grassley in announcing they won’t hold any hearings for an eventual nominee.

But Republicans found plenty of ammunition in Democrats’ past rhetoric to fire back with.

In July 2007, when President George W. Bush had 18 months left in his second term, Sen. Chuck Schumer, D-N.Y., urged the Democrat majority in the Senate to block Bush’s appointment of any more judges.

Republicans reminded Democrats that in June 1992, Vice President Joe Biden, then a senator from Delaware, argued that the Senate shouldn’t even hold a hearing if Bush’s father, George H.W. Bush, nominated a Supreme Court justice in the months before the November  presidential election.

On the Senate floor Monday, Grassley urged the Senate to follow what he dubbed “the Biden Rules.”

Democrats bristle under those comparisons.

Schumer told reporters Thursday that such arguments are “comparing apples to oranges.”

The New York Democrat accused his GOP colleagues of “taking speeches out of context.” He said that withholding a confirmation hearing has “never been done” and that “Republicans are the first to do it.”

In the Senate minority since the 2014 elections, Democrats have limited parliamentary options with which to counter Republicans.

They have been trying to outflank Majority Leader Mitch McConnell, R-Ky., by picking off rank-and-file senators through a public pressure campaign.

“The best weapon we have in this fight is the public,” Schumer told reporters. “And the public will put pressure on the senators, and the senators will pressure McConnell.” He added:

We don’t have a legislative tool because we’re not in the majority, except for shutting down the government, but we’re not going to do what they do. We have faith that the public will put pressure and they will have to yield.

The third ranking Senate Democrat could have reason for his optimism. A new Pew Research Center survey found that 56 percent of those polled say the Senate “should hold hearings and vote on President Obama’s choice to fill [the] vacancy.”

To keep the seat open, Republicans will have to remain unified for the nearly 11 months left in Obama’s time in office.

Democrats predict that Republicans will crack, as they have in similar fights over funding Obamacare, reauthorizing the Export-Import Bank, and confirming Attorney General Loretta Lynch.

Obama also suggested Wednesday that McConnell eventually will fold. Speaking to reporters in the Oval Office, the president said he already had talked to several Republican senators who were unenthusiastic about the ongoing battle.

“There’s not a lot of vigor when they defend the position they’re taking,” the president said. “They’re pretty sheepish.”

Next week, Grassley and McConnell plan to meet with the president to discuss the nomination process.

“We look forward to reiterating to him directly that the American people will be heard,” the two said in a joint statement, “and the next Supreme Court justice will be determined once the elections are complete and the next president has been sworn into office.”

So far Democrats have promised they won’t let the Supreme Court fight stall one of Senate Republicans’ biggest priorities: funding the government through the regular appropriations process.

They insist that the current debate is not opportunistic and that their argument would remain consistent if they reversed roles with the Republican majority.

“This is not a partisan issue in any way, shape, or form,” Reid said at the press conference.

In the current battle, Reid’s presumed successor as the Senate’s top Democrat says he’s a happy warrior. “I always have fun. I like this job. I like the politics. I’m from Brooklyn,” Schumer told The Daily Signal.