Why Have Universities Been Overtaken by Mob Rule? 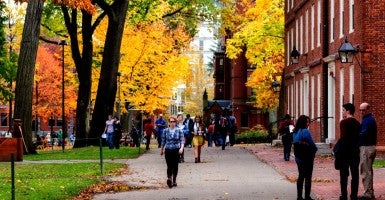 Student groups have asserted control of many university campuses across America. Without even resorting to force, they have successfully compelled the resignation of presidents and administrators, the firing and hiring of faculty, and drastic changes to university curricula, among other things.

University after university gives in to these demands, or at least pretends to do so. Only a few university presidents or administrators have spoken in defense of their own institutions or universities in general.

The former rulers of universities cannot defend themselves because they no longer understand the university’s purpose. Rather than ordering young minds, administrators have been ordered to resign. Having become convinced that universities service non-intellectual ends like multiculturalism, social justice, and pre-professionalism, presidents and administrators have little authority outside bookkeeping, job-placing, and safe space-creating.

They have forgotten that among the university’s highest purposes is preserving reason and free inquiry and making this spirit respectable to the public at large in a regime too often disposed to worship the power of public opinion and utility. Where else could this spirit live in our republic? In the mindlessness of popular culture? In fact, presuming that the mind requires protection for free inquiry, the institution of tenure makes sense only in this view. Tenure was not always understood as a sinecure for conference-going and activist data-mining.

Intolerance for free speech among student groups reveals their disregard for reason.

Intolerance for free speech among student groups reveals their disregard for reason. Any opposition to or skepticism of their cause is met with anger, threats, and possibly physical harm. This is because free speech honors man’s rational faculty, presuming it is the genuine commonality among human beings. But if one considers oneself as primarily belonging to an aggrieved group, one shares feelings with that group alone, and of course common enemies.

Looking to Europe, one sees how free speech can decline. There, the power of the law is leveraged in favor of the loudest, angriest factions against those speaking freely. In America, for now, free speech is controlled by public opinion only through shame, rather than force.

The Progressive pieties connected to social justice have contributed to the current anarchy. Progressivism has undermined the universities because it doesn’t believe in liberal education. Liberal education’s ends are independence, freedom, and self-rule, while progressivism points toward learning what properly to hate and overcoming it. Most universities do not question the puzzling formulation “social justice”—they teach the methods and the temperament to bring it about.

As such, progressive pieties often foreclose respect for humility, decency, and honest inquiry. Rather than persuading the mind, they command and shame it. Liberal education to the contrary requires a spirit of reverence aiming to liberate the mind from prejudice—the prejudices of birth, public opinion, one’s own distorted and inflated opinions of oneself—in preparation for citizenship.

If the standard of reason is denied, how then does one judge justice other than by succumbing to the loudest, angriest voice? Justice judged by intensity of feeling means the angriest have the highest claim to rule, a standard unbecoming of a civilized nation.

Moreover, these doctrines undermine the very thing that created the conditions for their existence. By constantly flirting with the idea that free speech should be silenced, the factions behind these doctrines are prepared to take away rights from others. What therefore happens to individuals if, goaded on by these own doctrines, a new barbarism emerges that cares little about freedom of speech and therefore about protecting universities, which are in effect their safe spaces?

The perspective of anger is incapable of understanding our nation’s needs and its common good. Neither is it capable of creating productivity, decency, self-respect, or political freedom. A public whose passions are its sole animating feature is unsuited for rule by laws.

For more on this topic, please join us at The Heritage Foundation for “Who Rules the Universities?” at 10:00 a.m. on Feb. 26.