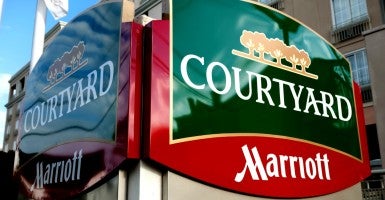 Businesses in Georgia were always free to embrace gay marriage, but now they want the government to force everyone in Georgia to do the same. (Photo: istockphoto)

Last Friday, the Georgia Senate passed a good bill that protects religious freedom in the aftermath of the Supreme Court’s redefinition of marriage. And already special interest groups and big businesses are trying to pressure the governor into refusing to sign the bill unless it is significantly watered down in the House.

This is yet another example of cultural cronyism. Businesses in Georgia were always free to embrace gay marriage—to bake wedding cakes for gay marriages and make floral arrangements for same-sex nuptials—and many do, but now they want the government to force everyone in Georgia to do the same.

And they’re threatening boycotts, travel bans, and relocations of businesses if the government doesn’t do as they wish. It’s Indiana all over again.

Big business, as represented by “individual corporate giants including Hilton Worldwide, Marriott and InterContinental Hotels Group”; the Metro Atlanta Chamber of Commerce; and the Georgia Hotel & Lodging Association, have all spoken out against the religious freedom bill as opening the door to widespread discrimination.

This law doesn’t harm minority rights; it protects them in the aftermath of the Supreme Court’s redefinition of marriage.

But if every Hilton, Marriott, and InterContinental hotel in Georgia already hosts receptions for newlywed same-sex couples—why can’t Georgia protect the mom-and-pop bed-and-breakfast or local Knights of Columbus hall that has a different set of beliefs about marriage? This law doesn’t harm minority rights; it protects them in the aftermath of the Supreme Court’s redefinition of marriage.

The hypocrisy of big business lobbying against the law is astounding. They want to be free to operate in Georgia according to their values, but they don’t want small-business competitors to be free to operate according to theirs. If all of the major corporations are already in favor of gay marriage, then this religious freedom law poses no threat. It merely protects the rights of those who disagree.

And protecting minority rights after major social change is a hallmark of American tolerance and pluralism. Georgia should stand strong and defend these rights.

In June 2015, the Supreme Court redefined marriage throughout America by mandating that governmental entities treat same-sex relationships as marriages. The Supreme Court, however, did not say that private schools, charities, businesses, or individuals must abandon their beliefs if they disagree.

Indeed, there is no justification for the government to force these entities to violate beliefs about marriage that, as Justice Kennedy noted, are held “in good faith by reasonable and sincere people here and throughout the world.” Americans who believe that marriage is the union of husband and wife should continue to be free to live and work according to their convictions.

Georgia’s H.B. 757 is a good first step to protecting freedom after the Supreme Court’s redefinition of marriage. It is a measured, reasonable, commonsense policy. It would ensure that no state agency discriminates against individuals or institutions for following their convictions about marriage as a man-woman union by revoking, for example, their nonprofit tax-exempt status or denying them government grants, contracts, accreditation, or licenses. The bill protects freedom and pluralism in the wake of social change—embodying the best of American values.

Other states have penalized bakers, florists, photographers, farmers, and adoption agencies simply for acting on their belief that marriage unites a man and a woman. Georgia wants to avoid following this bad precedent. Georgia wants to promote tolerance—and is being attacked because of it.

Unfortunately, H.B. 757 isn’t as clear as it should be with respect to protections for bakers, florists, and photographers, or even for the bed-and-breakfast owner. Rather than water down the bill, legislators should consider making these protections explicit.

America is in a time of transition. The court has redefined marriage, and beliefs about human sexuality are changing. During this time, it is critical to protect the right to disagree and the civil liberties of those who speak and act in accord with what Americans had always believed about marriage—that it is the union of husband and wife.