Senate Democrats Say GOP Will Back Down on Supreme Court Nominee 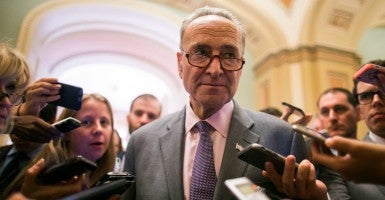 Sen. Chuck Schumer, D-N.Y., and other Democrats say they aren't worried about the GOP's pledge not to consider any Supreme Court nominees this year. (Photo: Congressional Quarterly/CQ Roll Call/Newscom)

Senate Democrats are predicting with certainty that Republicans will fold on their pledge not to hold hearings on President Obama’s eventual Supreme Court pick.

Schumer and other Democrats say they see the GOP’s current strategy as a bad rerun.

Republicans take hard stances, Schumer said, only to retreat later. And he predicted that their current position on the vacancy on the Supreme Court caused by the death of Antonin Scalia would be no different.

At least Republicans are being honest in their position, Sen. Richard Blumenthal, D-Conn., said, because “there’s no pretense here of responsibility, there’s no lipstick on this pig.”

Blumenthal sits on the Judiciary Committee, which considers judicial nominees. All 11 of the committee’s Republicans said Tuesday they won’t move on a successor to Scalia, who died Feb. 13, until the next president names one.

Blumenthal sarcastically complimented his Republican colleagues for being “absolutely forthright about their violation of their constitutional duty.”

Democrats want Obama to nominate, and the Senate to confirm, a replacement soon.

“There’s not a lot of vigor when they defend the position they’re taking,” he said. “They’re pretty sheepish about it.”

“I recognize the politics are hard for them because the easier thing to do is to give in to the most extreme voices within their party and stand pat and do nothing,” Obama said. “But that’s not our job. Our job is to fulfill our constitutional duties.”

The Democrats’ tough sound bites come as both parties engage in an aggressive messaging and grassroots battle.

At the press conference organized by the liberal advocacy group Common Cause, Sen. Al Franken, D-Minn., joined Blumenthal, Murphy, and Schumer in accepting petitions said to have more than one million signatures urging action on an Obama nominee.

Democrats are counting on grassroots pressure to convince Republicans to back down.  Running down a set list of past fights, Schumer highlighted episodes where he said Republican leadership talked big only to fold later.

The GOP will give up again, Schumer said, “like they did” on Obamacare, sequestration budget caps, the president’s executive action on immigration, the Export-Import Bank, and the confirmation of Attorney General Loretta Lynch.

This report has been updated to include President Obama’s comments.