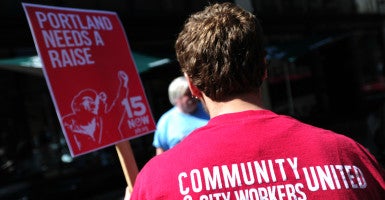 Oregon state legislators, acting despite the concerns of business groups, have passed a geographically based increase in the minimum wage. Two of the state’s business leaders, speaking to The Daily Signal, say they’re worried about what comes next.

We are deeply concerned about the impact it will have over the next seven years on the cost of food, child care, and other staples that are important to working families.

Brandt said he expects Oregon will lose about 62,700 jobs as a result.

The legislation will hike wages based on geographic location: inside Portland’s urban growth boundary to $14.75 an hour by 2022, $13.50 an hour for urban counties, and $12.50 for rural counties. The minimum wage will rise from the current statewide $9.25 an hour.

“There are very real consequences for these types of huge policy changes, so we’re very concerned,” Anthony K. Smith, Oregon state director for the National Federation of Independent Business, told The Daily Signal.

The state’s House of Representatives passed the bill Thursday with a vote of 32-26, following a five-hour debate, The Oregonian reported. The previous week, the state Senate debated six hours before passing the bill, known as Senate Bill 1532.

Much of the discussion was about “real versus hypothetical,” Smith said.

“When we’re talking to our members that are small businesses here in Oregon, these are not hypothetical,” he said. “These are things that they have to adjust to immediately in order to stay in business. Unfortunately, the reality of a bill like this is that everyone goes into crisis and survival mode.”

Small businesses, Smith said, have “real considerations” to take into account as they move forward:

They’re not going to be talking about ‘What do we do to expand? What do we do to hire more people?’ They’re going to be making some very difficult decisions, none of which are going to help them grow. They have to decide whether to reduce hours for employees, raise prices on customers, make a reduction in their workforce, relocate their business, or maybe even close their doors.

Brandt observed: “It’s really a combination of three things: raising prices, reducing hours, and looking at what layoffs may be necessary given the increase in labor costs.”

Democrats in the state legislature argued that the minimum wage wasn’t enough to allow someone to be self-sufficient, the Statesman Journal reported.

“When labor costs shoot up double digits, something absolutely has to give,” he said.

Brandt points to research and examples to Oregon’s north, in Seattle, where restaurants have had to close doors. Seattle’s minimum wage is set to rise to $15 an hour.

Oregon Gov. Kate Brown, a Democrat, came out in support of the bill, endorsing the measure before it passed and saying she would sign it.

“I started this conversation last fall, bringing stakeholders together to craft a workable proposal; one that gives working families the much-needed wage boost they need, and addresses challenges for businesses and rural economies presented by the two impending ballot measures,” Brown said in a prepared statement Thursday.

Brandt said he estimates that Oregon will lose 62,700 jobs as a result of  the legislation:

Moving forward, based on the economic study that we had conducted and based on where Oregon currently is … what we’ve done in the legislative process is signed up to really be on the bleeding edge of the minimum wage debate, where we don’t have a lot of information that really is relevant about what is going to happen in Oregon. We don’t think that Oregon should be a state where we experiment and gamble with the state of small businesses.

He said workers may have to deal with wage compression issues—where the employee has worked hard for years to get to where he is, then finds himself back making close to minimum wage.

Smith, the spokesman for independent businesses, said the change is shortsighted:

When we’re looking at these types of huge pieces of legislation that impact so many people, it’s easy to get caught up in the moment and not look back at where we’ve already been. I think we have enough evidence here, just by looking back at what’s happened here in Oregon over the last 14 years, to say that arbitrarily moving numbers and increasing numbers doesn’t actually solve problems.

Any kind of gain that a worker gets in their salary is a temporary gain, because the labor market and the cost of living will adjust—because that’s how market forces work.

In 2002, Oregon voters passed Measure 25, which required the minimum wage to be adjusted for inflation each year based on the Consumer Price Index.

At the time, Smith recalled, proponents made bold statements that it would take politics out of the issue and that Oregonians who worked full-time wouldn’t have to live in poverty.

“Here we are 14 years later, and this is a highly political, contentious issue, and it didn’t solve our poverty problem,” Smith said. “Now here we are again debating this, and people are saying the exact same things and making the exact same arguments.”

Two ballot initiatives, proposed by 15 Now and the Raise the Wage coalition, also seek to raise Oregon’s minimum wage. The proposals call for increases to $15 an hour and $13.50 an hour, respectively.

“The biggest takeaway is that it’s more important than ever to have a bipartisan plan to make sure that we are opposing the measures that are still slated for the ballot in November,” Brandt said, adding:

Republicans and Democrats really need to stand together in saying, we have made our decision about minimum wage and it’s time to start unifying the state as opposed to dividing it with ballot measures that frankly are very extreme.