National Debt Per Household Set to Total Nearly $200K in 2026. How We Can Change Course. 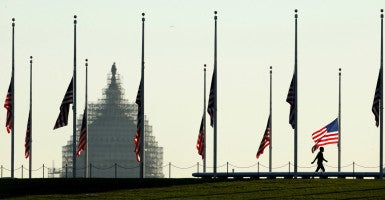 Federal spending in the United States is unsustainable and failure to address reckless spending and unmanageable debt will destroy our economy. (Photo: Kevin Lamarque/Reuters/Newscom)

Spending in Washington is out of control. Accountability has disappeared. Federal programs run on autopilot. Policymakers identify endless new spending “needs” without ever evaluating the effectiveness of existing programs.

Did you know that the federal government spent $569 million in 2014 to promote its own image? According to The Heritage Foundation’s Blueprint for Balance, “funds include spending on programs such as a $1 Presidential Gold Coin stakeholders outreach initiative, Forest Service messaging to parents of Spanish-speaking Tweens encouraging them to ‘discover the forest,’ and cooking videos to promote U.S. agriculture products overseas.”

The Congressional Budget Office (CBO)’s recent projections of our government’s budget outlook are positively terrifying. Federal spending in America is unsustainable, and failure to address reckless spending and unmanageable debt will destroy our economy.

If nothing is done, just one decade from now, in 2026, Americans will face:

Such enormous burdens on future generations will cripple the economy and impoverish millions of Americans. In order to solve this, the Heritage Foundation has an alternative path to rein in government spending and debt while improving our ability to help the poor and provide a secure national defense. The Blueprint for Balance shows how America can follow a path to prosperity, rather than to the poorhouse.

>>> To Read The Heritage Foundation’s: A Blueprint for Balance: A Federal Budget for 2017

By eliminating wasteful and inefficient spending and focusing taxpayer dollars on core government functions, Americans can experience a very different future. Under The Heritage Foundation’s Blueprint for Balance:

This alternative scenario is achieved through more effective spending across all areas of government. The Blueprint for Balance details 115 specific proposals to reduce non-defense discretionary spending by $97 billion in FY 2017 and lays out a path for returning entitlement programs to their original purposes, all the while maintaining a strong national defense.

This piece has been updated by the author to state that in 2026 each American household must pay $6,600 to cover previous generations’ excess spending.