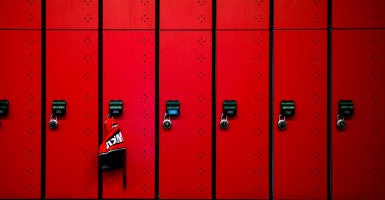 A man claimed a right to use a women’s locker room at a public swimming pool after his partial undressing there caused alarm.

According to Seattle Parks and Recreation, women alerted staff at Evans Pool staff when a man wearing swim trunks entered the women’s locker room and took off his shirt.

When staff told him to leave, the man reportedly said “the law has changed and I have a right to be here.”

Employees told Seattle’s King 5 News the man didn’t attempt to identify as female but cited a new Washington state rule allowing individuals to choose their bathroom based on their gender identity.

Police were not called to respond to the Feb. 8 incident, although the man returned to the locker room while young girls were changing for swimming practice, King 5 reported.

Seattle Parks spokesman David Takami told the station that since a protocol didn’t exist for someone to demonstrate gender to use public facilities, employees rely on appearance or verbal confirmation. He said the man offered neither.

“This didn’t seem like a transgender issue to staff—someone who was ‘identifying’ as a woman. We have guidelines that allow transgender individuals to use restrooms and locker rooms consistent with their gender identity. We want everyone to feel comfortable in our facilities,” Takami said in a prepared statement

“The Seattle Parks spokesman confirms what critics of these laws have said for a while now: There is no way for officials to confirm or deny someone’s ‘gender identity,’” Ryan T. Anderson, a senior research fellow at The Heritage Foundation and author of the report “Sexual Orientation and Gender Identity Laws Threaten Freedom,” said in an email to The Daily Signal.

“Sexual orientation and gender identity laws are based on subjective and unverifiable identities, not objective traits, and thus are prone for abuse.”

Washington state’s Human Rights Commission approved a rule in December that allows transgender persons to use the public locker rooms and bathrooms of their choosing.

The state Senate failed to repeal the rule by one vote on Feb. 10.

Supporters of the rule say concerns about the threat to women’s privacy and safety are unlikely to be realized, and transgender individuals are more likely to experience harassment without the rule.

“Because this population is at high risk for being targets of abuse, forcing transgender people to use a restroom inconsistent with their gender presentation or identity can increase their risk of experiencing violence,” the Washington Coalition of Sexual Assault Programs said in a statement opposing repeal.

Opponents argue that the rule leaves women vulnerable to sexual predators who might use the measure as a loophole to gain access to opposite-sex facilities.

“Not a single member of the Washington state Senate has suggested transgendered persons are sex predators. But many of us are concerned sex predators will claim to be transgendered,” state Sen. Tim Sheldon, D-Potlatch, said in a press release in response to the failure of the repeal effort.

If another person expresses concern or discomfort about a person who uses a facility that is consistent with the person’s gender expression or gender identity, the person expressing discomfort should be directed to a separate or gender-neutral facility, if available.

“Washington’s regulations even go so far to say that it is complaining women, not biological men, who should be asked to leave intimate facilities in cases of controversy over gender identity,” Roger Severino, director of the DeVos Center for Religion and Civil Society at The Heritage Foundation, told The Daily Signal, adding:

Washington’s policy gives short shrift to the legitimate concerns of women who feel their privacy is being violated by the presence of men identifying as women in women’s locker rooms and showers.