Icebreaker Polar Star Turns 40. Here’s Why US Needs a New One. 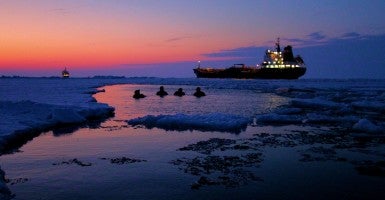 Zachary Smith is an intern with the Heritage Young Leaders Program.

One of the oldest vessels in the U.S. fleet celebrates its 40th birthday this year. After four decades in service conducting icebreaking operations in the Polar Regions of the globe, the USCGC Polar Star, a critical component of the U.S. Coast Guard fleet, has sailed through years of wear and tear, repairs, and refurbishing. As the only American vessel of its kind sailing today, the icebreaker is running out of time left in the fleet. Consequently, the U.S. needs to prioritize the construction of a new heavy polar icebreaker so that our national security interests can continue to be protected in both the Arctic and Antarctic regions.

The Polar Star will retire around 2020. Foreseeing the eventual departure of this vessel from the fleet, Coast Guard Commandant Admiral Thad Allen stated in 2008 that “our nation is at a crossroads with Coast Guard domestic and international icebreaking capabilities. We have important decisions to make. And I believe we must address our icebreaking needs now[.]”

That was eight years ago. Since that time, the need has grown more urgent as economic interests grow in the Arctic. The Coast Guard has responsibility for managing security issues in the Arctic ranging from search and rescue to oil response efforts, and it requires a heavy icebreaker to access Arctic waters, which are often covered in thick ice.

Unfortunately, these vessels are expensive, and the Coast Guard is chronically underfunded. The estimated cost of a heavy icebreaker is $1 billion. Given the fact that the president has requested only around $1 billion annually for all the Coast Guard’s acquisition needs, the Coast Guard has no choice but to be selective in the way it allocates funds to its various operations.

The Obama administration has taken steps toward improving U.S. icebreaking capability. In August 2015, the administration announced plans to accelerate the procurement of a new icebreaker from FY 2022 to FY 2020. The FY 2017 budget request is an important step in the right direction “by providing $150 million to complete all planning and design activities necessary to begin production activities by 2020.” However, the FY 2013 plan made explicitly clear that an icebreaker was to be procured in FY 2018, not just started. At present, the U.S. has no ships able to perform the heavy icebreaking missions once the Polar Star officially retires from the fleet. The administration will be challenged to explain how it will fill this void in capability. While $150 billion will help, the fact that it is more than ten percent of the Coast Guard’s entire budget reveals the extent to which the service is underfunded.

While the U.S. struggles to reinvigorate its polar icebreaker fleet, other countries have forged ahead in the construction of new vessels. Russia has continued producing icebreakers to improve its ability to patrol its vast Arctic coastline. Including government-owned vessels and those in the private sector, Russia sails 41 heavy polar icebreakers, which rival the Polar Star in capability. The government has declared that another 11 are in the planning and construction phases. In the Southern polar region, Chile has taken the lead in a growing effort by South American countries to assert their presence in Antarctic waters. Chile is currently constructing a state-of-the-art vessel to replace its aging polar icebreaker. The vessel will be ready for delivery in five years; plans were put forth in 2014.

As Russia and other countries seek to increase their presence in the Polar Regions, the U.S. should seek out options for producing an icebreaker in the most timely and cost-effective manner, including foreign-built ships. The U.S. should take immediate action to correct its shortfall in heavy icebreakers if it intends to maintain an effective presence in the world’s arctic regions.