How to Stop US Companies From Leaving the US 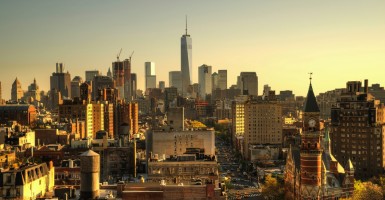 In his budget released earlier this month, President Barack Obama took some time to boast about his economic record, saying that “we rescued our economy from the depths of the recession … [a]nd today, our economy is the strongest, most durable on Earth.”

Unfortunately, he left out one slight caveat—America’s “recovery” under Obama, by almost any metric used, has been the weakest in over 50 years.

In terms of post-recession economic growth, Obama’s recovery ranks dead last. Taken cumulatively, the lost output of this recovery compared to past recoveries is a whopping $5.4 trillion.

What’s holding us back? While there are many contributing factors, one of the most important is our broken corporate tax system.

At 35 percent (39.1 percent when you include state business taxes), the United States has the highest corporate tax rate in the industrialized world. Our tax system treats investment worse than most advanced countries. U.S. businesses must wait to deduct their capital costs for as long as 39 years. To make matters worse, we are also the only major country that taxes its businesses on income earned anywhere, rather than just income earned on American soil. Collectively, these policies make America a very bad place to do business. Since 2012 alone, at least 22 major American companies have left the United States and moved overseas to take advantage of lower tax rates, taking with them jobs and investment.

This is a sad story for a country that once prided itself as the haven of free enterprise, and it’s part of the reason the U.S. continues to fall behind other countries in economic freedom rankings.

This constructive bill would automatically set the U.S. corporate rate five percentage points below the Organization for Economic Co-operation and Development (OECD) average. Since the OECD average is currently 25 percent, under the CREATE Jobs Act, the U.S. corporate income tax would fall to 20 percent. Using the OECD average is an appropriate gauge for setting tax rates because the OECD member countries are the United States’ main economic competitors.

Bringing our corporate tax rates in line with other developed countries is critical if we want to stop the ongoing stampede of businesses leaving our shores. By making America a more attractive place to do business, the CREATE Jobs Act will bring jobs while at the same time boosting investment and incomes.

According to the Tax Foundation, over the long term, cutting the corporate tax rate to 20 percent would create more than 600,000 jobs, grow GPD by 3.3 percent, and increase wages by 2.8 percent.

While it’s far from a complete solution, the CREATE Jobs Act makes the U.S. a more competitive place to do business, and in doing so, it helps put us on the path to real economic recovery.