Why UK Leaving European Union Is Good for America 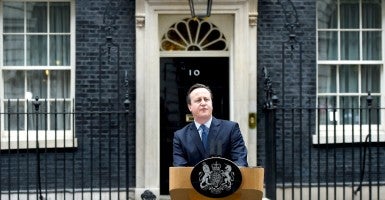 British Prime Minister David Cameron delivers a statement on the status of the UK and the European Union outside of No. 10 Downing Street, in London, Feb. 20. (Photo: Andy Rain/ EPA/Newscom)

Prime Minister David Cameron has announced a referendum vote to be held on June 23 that will determine Britain’s membership in the European Union.

In the eyes of millions of Britons, the European Union has grown into an undemocratic and unaccountable federal superstate.

For the first time in more than 40 years, British voters will be able to have a say on their future in Europe.

For decades, the British people have had to surrender their right to self-determination and have been forced to endure the humiliation of having British laws being overruled by European courts, and a multitude of rules and regulations imposed by unelected bureaucrats in Brussels.

Despite being one of the world’s biggest economies, and possessing the most powerful military in Europe, Great Britain is not in a position to exercise full control of its own borders, and cannot even negotiate its own trading deals. In the eyes of millions of Britons, the European Union has grown into an undemocratic and unaccountable federal superstate that tramples on the sovereignty of its members with impunity.

Brexit, a British exit from the European Union, offers an opportunity for the British people to take back their freedom and return to being a truly global power with global interests. This is good for Britain and for the vital partnership between the United States and the United Kingdom.

Already, six members of Cameron’s Cabinet (Michael Gove, Iain Duncan Smith, Priti Patel, Chris Grayling, Theresa Villiers, and John Whittingdale), as well as the mayor of London, Boris Johnson, have announced they will campaign for Brexit. They could be joined by more than half of the Conservative Party’s members of Parliament, in addition to several MPs from the opposition Labour Party.

In four months’ time, the British people will make the most important decision of their generation—whether to be a truly free and sovereign nation. As Boris Johnson put it in an article for The Daily Telegraph:

This is a once-in-a-lifetime chance to vote for real change in Britain’s relations with Europe. This is the only opportunity we will ever have to show that we care about self-rule. A vote to Remain will be taken in Brussels as a green light for more federalism, and for the erosion of democracy.

As I noted in an earlier piece for London-based CapX:

A Great Britain shorn of the shackles of the EU will be a stronger and more powerful ally for the United States. Tied to a sinking, decaying Europe that is addicted to big government, high taxes, excessive public debt, and bloated, unaffordable entitlement programs, Britain faces a stark choice between a fresh start as a truly sovereign nation free to shape its own destiny, or the status quo, simply rearranging the deckchairs on the Eurofederalist Titanic.

Polling shows that a growing number of Britons wish to launch a lifeboat offered by the upcoming EU referendum. If indeed Britain does seize this historic opportunity, the American people must be with them. Brexit offers tremendous prospects on both sides of the Atlantic, from a US/UK free trade deal to London liberated from suffocating EU regulations. The biggest winners will be economic freedom and self-determination, two of the most powerful forces that advance prosperity and liberty across the world.

It is in America’s interests to have a British ally that is a prosperous, self-confident, free, sovereign nation

It is in America’s interest to have a British ally that is a prosperous, self-confident, free, sovereign nation—one that can work closely with the United States on the world stage. If Britain votes to leave the European Union, the Special Relationship will be regenerated after years of neglect, and the ties that bind the two biggest engines of the free world will only be strengthened. The British people have nothing to fear from Brexit, and nor do Americans.

Ignore the scaremongering coming from the Obama White House and the European Commission. Brexit will be a cause for great celebration on both sides of the Atlantic.