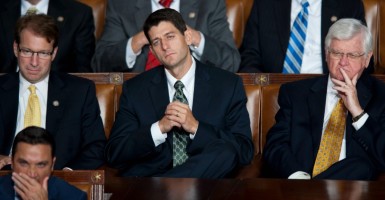 On Monday night, Speaker Paul Ryan channeled the Rolling Stones and “Schoolhouse Rock” on Fox News’ “The Kelly File” to explain the concept of divided government and the current context of Capitol Hill gridlock.

The Republican House speaker told host Megyn Kelly that Republicans can’t always get what they want. But if the electorate gives them the White House, they’ll get what they need.

A hangover from outgoing Speaker John Boehner, R-Ohio, that agreement increased spending levels over the limits established in the 2011 Budget Control Act.

That deal, Ryan argues, requires context and “a civic lesson.”

Though Republicans control both chambers of Congress, the Wisconsin speaker explained that “when you have a liberal progressive president who won’t sign conservative bills into law, they don’t go into law.”

Conservatives in both the House and the Senate challenge that logic. Members such as Rep. Jim Jordan, R-Ohio, and Sen. Mike Lee, R-Utah, want to scrap the Boehner-Obama budget agreement and restart with a lower spending level—one that reflects Republican priorities.

Currently, that budget skirmish divides the Republican ranks. Conservatives say the spending levels negotiated in the Boehner-Obama budget are a non-starter. Talks continue inside the conservative House Freedom Caucus. The budget hawks want to find at least $30 billion’s worth of discretionary spending cuts in a $4 trillion budget.

But Ryan and GOP leadership have been clear: If Republicans want to pursue marquee reforms, they must get on board with the higher spending levels first.

During a closed-door meeting before Congress left Washington for Presidents Day recess, Ryan told Republicans that if they’ll just stomach the higher spending levels, the party has “a chance to do big things in 2017.”

That’s more a messaging than legislative exercise. Realistically, Ryan’s reform agenda won’t make it past President Barack Obama’s veto pen. And with a Senate scrambling to find a replacement to fill Justice Antonin Scalia’s seat on the Supreme Court, it’s uncertain how much work the upper chamber will accomplish this year.

Ryan said a GOP-led Congress should “give the people a clear and compelling choice.” And by laying out an agenda of significant across-the-board reforms, Republicans can convince an electorate to deliver the White House.

“We have to have the people break this tie [between a] liberal president, conservative Congress,” Ryan said. “We have to do big things soon. Give us a president we can work with, and in 2017 we can get this country back on track.”