The Rise of Intolerant Liberals 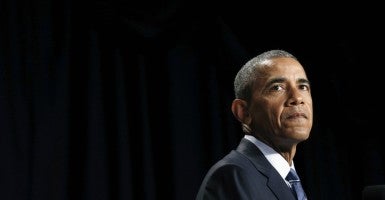 Today’s liberal intellectuals are much more interested in stifling debates than having them. (Photo: Kevin Lamarque/Reuters/Newscom)

Why have liberals become so intolerant? They think nothing of denying someone as prominent as former Secretary of State Condoleezza Rice from speaking on a college campus. They embrace activists who shut down speakers. They publicly shame people for the slightest deviation from liberal orthodoxy.

Their mindset is the very definition of closed-mindedness.

For them everything from science to the law is “settled” once they get into power. Progress is a one-way street. Their mindset is the very definition of closed-mindedness.

The easy answer would be “they are all bad people.” But frankly that’s a cop-out. Not all liberals are bad people, any more than all conservatives are angels. No doubt among the fevered minions of liberal activists there are people with, shall we say, psychological issues, but that doesn’t explain why so many otherwise reasonable people are so beholden to liberalism as an ideology.

The short answer is that it pays. A lot of people in and out of government benefit. Liberalism also makes people feel good. Whether you are politician dispensing government benefits or the citizen receiving them, liberalism hides the self-interest and sometimes even greed that motivate people.

But the devolution of liberalism into something now openly illiberal has causes far more complex than these familiar explanations provide.

For one thing, liberalism is no longer mainly about ideas. It is about power—as in who has it and who doesn’t. Believing they already know the answers to all questions, liberals view politics and governing as mopping up operations.

>>> Pre-Order Kim Holmes’ New Book, “The Closing of the Liberal Mind: How Groupthink and Intolerance Define the Left”

Academic research is about proving a point rather than discovering the truth. Science is treated as the private preserve of a certain ideology, not to mention a political weapon to justify preferred policy outcomes. Mistaking as they do their ideology for morality, they see no reason to shun the most cynical of political tactics to get their way. For them, the end justifies the means.

Today, there is virtually no government program that liberals won’t embrace. Clinton had his Sister Souljah moment when he repudiated extremism in his party. Today liberals can’t get close enough to the “black lives matter” movement.

Third, liberals have surrendered to (some would say created) the nasty culture of intolerance that infuses our popular culture. To this extent, they are not at all different from some self-proclaimed right-wing people who do the same. But the difference is—or at least is supposed to be—that liberals profess to be the party of the open mind. They have become anything but.

Now that they control so many of our institutions—our universities, high-tech corporate board rooms, the entertainment industry, and increasingly even mainstream churches—they are closing the door behind them, making sure that no one, especially conservatives, will sneak in the back door.

Finally, liberalism has become hostile to open inquiry. Liberal intellectuals used to love open-ended debates because they thought they could win people over with their intelligence and wit. No more. Today’s liberal intellectuals are much more interested in stifling debates than having them. After all, who needs debates when all the big questions have been answered by their ideology? Liberals are no longer the scruffy radicals of Washington Square, but a tenured Mandarin class hotly competing for government research grants.

As I argue in my forthcoming book, “The Closing of the Liberal Mind,” to this Mandarin class:

Knowledge, like human progress, must be created and managed by state policy, bureaucratized and forced on all people equally despite the infinite differences that exist between individual human beings. It is a sad state of affairs, especially for intellectuals who are expected to know better.

There’s an old saying, he who controls knowledge controls power. Liberals get this adage instinctively. They treat truth not as wisdom—as something to be discovered—but as a will to power to be imposed by law and governmental fiat.

In this quest for power, they have become masters at controlling not only knowledge, but popular culture. For example, when Americans watch entertainers like Jon Stewart, they don’t see an ideologue channeling liberal clichés. They see just a really funny guy. The ideology is completely buried. Young people respond in lockstep not because they were indoctrinated by some boring Maoist, but because they think the whole thing is great fun.

What we have here is nothing less than a new and highly attractive form of illiberalism—an illiberal liberalism, if you will. Intolerance is championed in the name of tolerance, closed-mindedness in the name of open-mindedness, and hatred in the name of compassion. It’s classic double-think, and the deception is precisely the danger. Americans don’t expect liberals to be authoritarian wolves in sheep’s clothing. They are not prepared to be on guard all the time because liberals are supposed to be the good guys—the guardians of freedom of speech and the like.

Alas, they are not. Just ask Condi Rice or anyone else who has been denied the opportunity to speak on an American campus.