The Green Energy Goal That Is Condemning Many to Prolonged Poverty 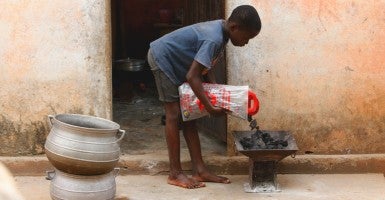 The problem with this is that renewable energy projects provide less energy per dollar than could be provided from conventional energy sources. (Photo: Pascal Deloche / Godong/picture alliance / Godong/Newscom)

Poverty and energy poverty go hand in hand. It is estimated that three billion people still rely on solid fuel (firewood, cornstalks, etc.) for cooking, which, according to the World Health Organization, causes four million deaths per year from the indoor air pollution.

But instead of promoting electricity generation that would take the pollution out of the house altogether, there is a push by the Global Alliance for Clean Cookstoves to merely reduce the amount of solid fuel burned inside theses poor houses. Their goal is to replace 100 million stoves that burn “firewood; agricultural waste, including corn stalks and dung, and natural debris, such as twigs, limbs and pinecones” with 100 million other stoves that burn the same things (just less of them).

The alliance membership includes the World Bank, which has recently adopted a policy against financing coal-fired power plants. Also, none of the pending energy projects financed via the Inter-American Development Bank (another alliance member) provides electric power from coal, natural gas, or oil.

The problem with this is that renewable energy projects provide less energy per dollar than could be provided from conventional energy sources, even when these conventional sources are equipped with modern pollution abating technology. Researchers have concluded that for every person lifted from energy poverty with renewables, the same money would have lifted four people had the money been spent on conventional power sources.

But maybe somebody else should give them a kick in the rear for unnecessarily condemning so many of the poor to continuing energy poverty.

It seems the goal is not to raise the poor’s standard of living to levels enjoyed in the West, but simply to have them burn fewer sticks and less dung inside their houses. Alas, even the benefit of swapping in these more efficient dung-burners appears to be an illusion.

Of course, an argument can be made that whatever other options there may be, cleaner cook stoves are better than dirtier cook stoves. But these cook stoves seem to be substitutes for efforts to provide affordable, modern electric power to those in need.

A recent publication in the prestigious, peer-reviewed American Economic Journal: Economic Policy documented that there were no long-term (after four years) health benefits from clean cook stoves. After two years, smoke inhalation was not at all different, and by the fourth year, nearly one-third of the households had so little use for the new stoves that they actually destroyed them.

Some excerpts speak for themselves:

“Furthermore, we fail to find a positive impact on a wide variety of measured and self-reported health outcomes, including infant birth weight, infant mortality rates, probability of a cough, blood pressure, or even the probability of any illness in the last 30 days.”

“We find no changes across health outcomes or greenhouse gas emissions.”

So it seems that the clean cook stove’s primary benefit is to provide a fig leaf for international organizations whose other activities prolong energy poverty for millions upon millions in the developing world.