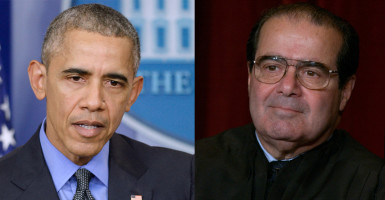 Speaking to the Illinois General Assembly, he stressed that there was a better way:

Recently, I’ve been thinking a lot about something a friend of mine, Deval Patrick, once said to his constituents when he was governor of Massachusetts. He said, “Insist from us and from each other a modicum of civility as the condition for serving you.” This is what he told voters. “Insist on us having a modicum of civility.”

I think that’s something that all of us, as Americans, have to insist from each other. Our children are watching what we do. They don’t just learn it in school, they learn it by watching us—the way we conduct ourselves, the way we treat each other.

If we lie about each other, they learn it’s OK to lie. If we make up facts and ignore science, then they just think it’s just their opinion that matters. If they see us insulting each other like school kids, then they think, well, I guess that’s how people are supposed to behave.

On Feb. 17, the White House announced that Vice President Joe Biden and his wife Jill would be attending Scalia’s funeral, suggesting that Obama would not be.

Apparently, it’s not necessary for our children to learn that when it comes to political opponents, differences are put aside at the grave.

No, it’s not an outright snub: The Obamas will be visiting the Supreme Court on Friday, when Scalia’s body will be lying in repose.

Yet not only has the White House not stated what Obama will be doing instead on Saturday, but White House press secretary Josh Earnest wouldn’t rule out that Obama was going golfing, saying merely, “I don’t have a sense of what the president’s plans are for Saturday.”

But why shouldn’t he take part of Saturday to honor Scalia, a man who spent decades of his life in public service?

Sure, Scalia was unabashedly conservative. But he also showed a fierce devotion to his responsibilities as a Supreme Court justice. In the Washington Post, a former Scalia clerk (who identifies herself as “politically liberal”) writes admiringly of Scalia, saying, “If there was a true surprise during my year clerking for Scalia, it was how little reference he made to political outcomes. What he cared about was the law, and where the words on the page took him.”

Justice Ruth Bader Ginsburg struck a similar theme in her statement released after Scalia’s death. Referencing a comedic opera written about the two, she said, “Toward the end of the opera ‘Scalia/Ginsburg,’ tenor Scalia and soprano Ginsburg sing a duet: ‘We are different, we are one,’ different in our interpretation of written texts, one in our reverence for the Constitution and the institution we serve. … It was my great good fortune to have known him as working colleague and treasured friend.”

No one is going to mistake Obama’s presence at Scalia’s funeral as an endorsement of the justice who sarcastically wrote in his King v. Burwell dissent that Obamacare should be called “SCOTUScare.” But as former White House press secretary Dana Perino told Fox News’ Megyn Kelly, “It would be the right thing to do.”

“The president said that one of his regrets was that he wasn’t able to bridge partisan divides,” Perino said. “And then he fails to practice what he preaches. This is an easy thing to do. It takes an hour out of your day.”

The White House is defending Obama’s actions, with Earnest saying Thursday that Biden has less security, and criticizing those using Obama’s absence as a “political cudgel.”

“The president doesn’t think that that’s appropriate, and in fact, what the president thinks is appropriate is respectfully paying tribute to high-profile patriotic American citizens even when you don’t agree on all the issues,” Earnest said. “And that’s what he’s going to do.”

But actions speak—and opting for the presumably shorter visit on Friday is telling. It’s hard to imagine Obama skipping out, particularly without giving a reason, a funeral for one of the four Democrat-appointed justices if, God forbid, any of them should pass away.

Obama might talk a good game about bipartisanship. But when he was given a powerful opportunity Saturday to show solidarity, to demonstrate that what unites us as Americans is bigger than our political divisions, he chose a course that will exacerbate, not diminish, what he calls our “poisonous political climate.”