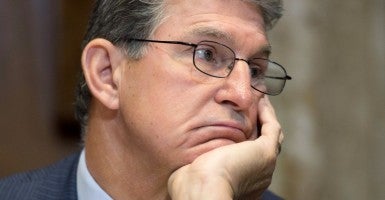 A Supreme Court justice nominee appointed by President Barack Obama could do much to shift the ideological weight of a bench split now evenly among justices nominated by Republican and Democrat presidents.

In particular, the new justice could provide the deciding vote to overturn the District of Columbia v. Heller decision. In that landmark case, the Supreme Court ruled 5-4 that the Second Amendment protects the individual’s right to possess and own a firearm.

But four pro-gun Democrats in the Senate didn’t respond to The Daily Signal’s request for comment about whether they would support an Obama nominee who opposes the Second Amendment.

Sens. Joe Donnelly of Indiana, Heidi Heitkamp of North Dakota, Joe Manchin of West Virginia, and Jon Tester of Montana voted with Republicans and against Obama’s 2013 efforts to overhaul the nation’s gun laws.

Each voted against at least one of nine separate amendments that would have propelled what Obama called “common-sense gun reforms.”

All are Democrat facing re-election contests in red Republican states in 2018. All have earned above an “A-” rating from the National Rifle Association in the past.

The silence of the set comes as the White House has begun its search for a nominee to replace Scalia. At a Tuesday press conference, Obama rejected the idea of nominating a more moderate candidate that Senate Republicans could find palatable.

“You shouldn’t assume anything about the qualifications of the nominee,” Obama told Reuters, “other than they’re going to be well-qualified.”

Based on Obama’s past nominees, it’s not likely that the president will select a job candidate who doesn’t stray far from his platform on gun control.

Justice Sonia Sotomayor, Obama’s first Supreme Court nominee, dissented in the 2010 case McDonald v. City of Chicago and voted that that the Second Amendment does not apply to the individual states.

The second justice nominated by Obama, Elena Kagan, has not made any votes or public remarks on the issue during her tenure on the court. While serving as the Obama administration’s solicitor general, however, she declined to issue a routine brief in favor of or against the decision.

During her 2010 confirmation, the NRA opposed her while the pro-gun control Brady Campaign endorsed her nomination.

In 2008, Scalia delivered the deciding vote in the D.C. v. Heller decision, which ruled that individuals have right to possess guns for lawful purposes.

Writing the decision for the majority, Scalia noted that:

History showed that the way tyrants had eliminated a militia consisting of all able-bodied men was not by banning the militia but simply by taking away the people’s arms, enabling a select militia or standing army to suppress political opponents.

Since the 2013 shooting at Sandy Hook Elementary in Newtown, Conn., Senate Democrats have made multiple efforts to revisit and beef up existing gun control laws.

Frustrated by congressional Republicans, in January Obama announced new executive actions to reduce what he considers a “gun violence epidemic.”

Obama’s nomination provides an opportunity for the administration to place a justice onto the high court to extend that effort.