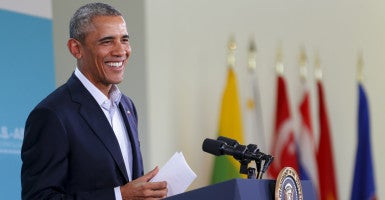 President Barack Obama said he isn’t looking to nominate a moderate to the Supreme Court.

At a press conference Tuesday following the U.S.-ASEAN summit in California, reporter Jeff Mason of the Reuters news agency asked Obama to clarify the ideological leanings of his likely judicial nominee.

A White House transcript records the exchange between Mason and Obama after the Association of Southeast Asian Nations summit:

Mason: Thank you, Mr. President. Following up on that, should we interpret your comments just now that you are likely to choose a moderate nominee? Would you—?

Obama: I don’t know where you found that. You shouldn’t assume anything about the qualifications of the nominee other than they’re going to be well qualified.

Hans von Spakovsky, senior legal fellow at The Heritage Foundation’s Edwin Meese III Center for Legal and Judicial Studies, said Obama’s comments are “certainly no surprise,” given the president’s history of nominations for federal courts over the past seven years.

Asked if we should expect POTUS will nominate a moderate to SCOTUS, POTUS quickly says: No.

Obama also said he would nominate a “very well qualified candidate” in due time in the wake of Justice Antonin Scalia’s death.

“If we are following basic precedent, then that nominee will be presented before the committees; the vote will be taken; and ultimately, they’ll be confirmed,” Obama said.

This is the Supreme Court. The highest court in the land. It’s the one court where we would expect elected officials to rise above day-to-day politics. And this will be the opportunity for senators to do their job.

Senate Majority Leader Mitch McConnell, R-Ky., has said the Senate will not confirm a nominee while Obama, a Democrat, holds office. Republican majorities hold both the U.S. House of Representatives and the Senate.