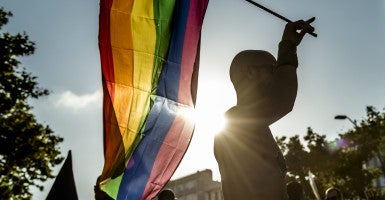 When a 9-year-old boy who identifies as Stormi, a transgender girl, started selling Girl Scout cookies, one neighbor was not amused, according to Buzzfeed.

The neighbor rebuffed him, reportedly saying, “Nobody wants to buy Girl Scout cookies from a boy in a dress.”

The neighbor is being called transphobic—but perhaps the neighbor thought he was being pranked by a boy and reacted accordingly. Not everyone assumes that a boy in a dress selling Girl Scout cookies is transgender.

Stormi looked like a boy to the neighbor because he really is a boy. Transgender people may deceive themselves, but they do not deceive others.

Life in society is not some fantasy world where a boy should pretend he has magically transformed himself into a girl simply by uttering the words “I am a girl” and changing how he presents himself.

The people who strongly object to the honest reaction from a man saying, “Nobody wants to buy Girl Scout cookies from a boy in a dress” are perhaps gender-phobic, rejecting and ridiculing the reality of male and female genders.

While studying psychology in a university program I discovered that trans-kids most often are suffering from a variety of disorders, starting with depression—the result of personal loss, broken families, sexual abuse, and unstable homes.

The people who encourage very young kids to act out, switch genders, and live a life of pretend need to understand that Stormi could be suffering from a dissociative disorder, just as happened with me. My feelings of not wanting to be a boy started in early childhood as result of cross-dressing at the hands of my grandma.

Stormi could be in need of psychotherapy, not a dress.

Caregivers all too often collaborate with a mental disorder instead of treating it. Telling a psychologically troubled boy he has changed genders is not compassion, but can become reckless parenting. By withholding psychotherapy, parents could be abusing the kid.

Living in a self-made gender fantasy world void of reality is not psychologically or emotionally healthy.

I know that to be true. I was transgender kid at the age of 4. For decades, as I tried to live in my male birth gender, the feelings of being a woman only grew stronger.

I sought help from a renowned gender specialist who told me that mine was a clear-cut case of gender dysphoria—strong, persistent feelings of identification with the opposite gender and discomfort with one’s own assigned sex. He said the only way to get relief was to surgically change genders.

I underwent gender reassignment surgery at 42 years of age after cross-dressing for most of my life.

I lived as a transgender, Laura Jensen, female, for eight years. While studying psychology in a university program, I discovered that trans kids most often are suffering from a variety of disorders, starting with depression—the result of personal loss, broken families, sexual abuse, and unstable homes. Deep depression leads kids to want to be someone other than who they are.

That information sure resonated with me.

Finally, I had discovered the madness of the transgender life. It is a fabrication born of mental disorders.

I only wish that when I went to the gender counselor for help he would have told me I couldn’t really change genders, that it is biologically impossible. Instead, he approved me for gender reassignment surgery, a surgery that, if I had been provided proper psychotherapy, would never have been necessary or appropriate.

The Role Trauma and Psychological Disorders Can Play

The likelihood that the child known as Stormi is suffering from separation anxiety or some other psychological disorder cannot be ignored. Stormi is living in a foster home. While it may be safe and necessary, foster care is intended to separate the child from the birth parent. This can lead to psychological disorders like separation anxiety disorder.

Separation anxiety occurs as the result of loss or separation from the birth parent. Disruption in a child’s home environment can lead to stress, depression, and anxiety. Living in a foster home even under the best conditions can be stressful to a young person.

Separation anxiety disorder and other psychological disorders can masquerade as gender dysphoria, leading caregivers and medical practitioners to misdiagnose and not provide proper or effective psychotherapies.

Stormi’s life will evolve as maturity unfolds. Most likely in 15 or 20 years, reality will set in that he really never changed genders. This is often a turning point where the trans life is not looking as good as it once did.

Thankfully, like me, many transgender persons return to the gender they once shed. Slowly they restore the life that was lost.

The three men who came up with the idea of changing boys into girls and making transgenders, Alfred Kinsey, Harry Benjamin, and John Money, were pedophilia advocates. (For more of the history, see “Sex Change” Surgery: What Bruce Jenner, Diane Sawyer, and You Should Know.)

The neighbor man was correct about one thing: The Girl Scout at his door was really a boy in a dress—just like I was as a young boy who thought I was a girl.