The Economic Value of Marriage 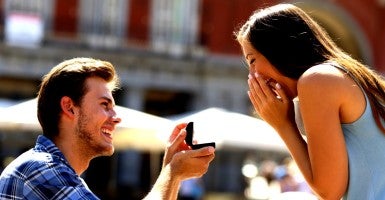 In honor of National Marriage Week, consider this question: Does marriage impact the economic well-being of societies?

One of the most important answers to the solution of poverty lies not in government programs, but in the institution of marriage.

For the past 50 years, our country has been losing the war against poverty. More than $22 trillion and 80 government means-tested welfare programs later, the results have fallen far short of success. In fact, in our eagerness to win this war, we have inadvertently become its perpetuators. One of the most important answers to the solution of poverty lies not in government programs, but in the institution of marriage.

Since the beginning of the government’s “War on Poverty,” marriage rates have declined sharply. The percentage of children born outside marriage has increased from seven percent in 1964 to over 40 percent in 2014. Tragically, children in single-parent homes are more than five times as likely to be poor compared to their peers in married-parent families.

The increase in non-marital births is especially prevalent among women with lower levels of education. Nearly two-thirds of births occurring among high school dropouts are to single women, in contrast with only 8 percent of non-marital births for women with a college degree. As a result of this shift in household structure, a two-caste society is being created, with educated, married-couple households at one end and uneducated, single-parent households at the other. This places a large portion of the nation’s children at a great disadvantage.

The national breakdown in marriage and the subsequent rise in unwed births are a root cause of the nation’s social and economic problems. The consequences of childhood poverty go beyond immediate physical hardships to impact the child’s future ability to thrive. Children born outside marriage are more likely to experience poorer educational outcomes: They are less likely to graduate from high school or attend and complete college compared to children from intact families. They are also more likely to experience psychological distress and are less likely to form stable and happy relationships.

In a recent study, “Strong Families, Prosperous States,” co-authors Brad Wilcox, Joseph Price, and Robert Lerman explore the link between family household structures and macroeconomic outcomes. They conclude that “to the extent that states across the nation are home to strong families—especially as measured by the share of families headed by married parents—they enjoy above-average levels of economic growth, economic mobility, and median family income, and below-average levels of child poverty.”

Wilcox, Price, and Lerman identify four explanations for the economic success of strong families at a state level: “[T]hey boost male residents’ labor force participation and engagement in the labor force; increase economies of scale, efficiencies, and savings for families; foster better educational and labor force outcomes for children; and reduce the prevalence of crime and violence.”

Tragically, far too many of the nation’s children do not enjoy the benefits of married parents. Leaders at every level should seek for ways to strengthen marriage. A good place to start would be to find ways to reduce marriage penalties in the government means-tested welfare system. Another step would be implementing public advertising campaigns on the importance of marriage and the risks of unwed childbearing, especially directing efforts toward those communities where marriage breakdown is most prevalent.

While marriage may not be the cure-all for society’s ills, it is vital to protecting against poverty, and there is much work to be done in this area. Strong marriages are in everyone’s best interest. Strengthening marriage to increase the opportunity for as many children as possible to be raised by their married mothers and fathers should be at the top of the nation’s antipoverty agenda.