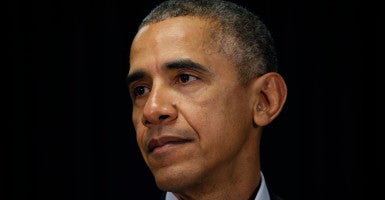 The fight over who should fill Antonin Scalia’s seat on the Supreme Court broke out quickly after the justice’s death Saturday. Both parties wasted little time marking the battle lines for a clash that could continue until President Barack Obama leaves office.

Senate Majority Leader Mitch McConnell made his position clear just hours after the news broke. The Kentucky Republican wants Scalia’s seat to remain open until after the 2016 election.

“The American people should have a voice in the selection of the next Supreme Court justice,” McConnell wrote in a statement. “Therefore, this vacancy should not be filled until we have a new president.”

Senate Minority Leader Harry Reid, D-Nev., fired back a counterstatement: “Failing to fill this vacancy would be a shameful abdication of one of the Senate’s most essential constitutional responsibilities.”

McConnell’s Democratic counterpart also urged the president to “send the Senate a nominee right away” and said that leaving the seat open “would be unprecedented in recent history.”

Obama laid the groundwork for the fight to fill Scalia’s seat Saturday night. In a press conference from California, he said there was plenty of time for him to nominate a justice and for the Senate to consider his nominee.

“I plan to fulfill my constitutional responsibilities to nominate a successor in due time,” Obama said. “There will be plenty of time for me to do so and for the Senate to fulfill its responsibility to give that person a fair hearing and a timely vote.” He added:

These are responsibilities that I take seriously as should everyone. They’re bigger than any one party. They’re about our democracy. They’re about the institution that Scalia dedicated his professional life.

The eventual nominee will be the third Supreme Court justice advanced by Obama. Justices Sonia Sotomayor and Elena Kagan won confirmation when Democrats held a majority in the Senate.

Following Scalia’s death, lawmakers from both parties were quick to close ranks around their leaders.

Putting the country first means Obama nominating a Justice and the Senate doing its constitutional duty by voting on the nominee.

It's critical now that @POTUS & the Senate move quickly and thoughtfully to nominate and confirm a nominee this year https://t.co/rChw2SgPLT

Majority Leaders statement hard to believe. Final proof that GOP believes this President, and the election that chose him, is illegitimate.

Joining @ThisWeekABC tomorrow. Talking about confirming the #SCOTUS nomination, one of the Senate's most scared duties.

I will adamantly oppose any attempt by President Obama to fill this vacancy during the remainder of his term. https://t.co/rSvfdgl2BW

The Senate should not confirm a new Supreme Court justice until we have a new president. (2/2)

The ensuing fight could dominate the chamber’s agenda in the coming months.

Sen. Chuck Grassley will do much to turn the tide of that coming conflict while serving as chairman of the Judiciary Committee. And the Iowa Republican has already signaled he won’t move any nominees out of committee.

“It’s been standard practice over the last 80 years to not confirm Supreme Court nominees during a presidential election year,” Grassley wrote in a statement. He continued:

Given the huge divide in the country, and the fact that this president, above all others, has made no bones about his goal to use the courts to circumvent Congress and push through his own agenda, it only makes sense that we defer to the American people who will elect a new president to select the next Supreme Court justice.

The traditional but unofficial Thurmond-Leahy rule dictates that the Senate halt all judicial confirmations in the last six months of a president’s time in office.

With Grassley in opposition, it will be difficult, but not completely impossible, for Democrats to advance a nominee out of committee and to a Senate floor vote. Reid could file a written motion to discharge a nominee out of the Judiciary Committee and move the motion directly to the Senate calendar for consideration. The motion to discharge would have to lie over one legislative day under Senate Rule XIV before Reid could move to proceed to it, according to a Senate source with knowledge of the process.

With 268 days left in office, Obama hasn’t run up against that cutoff date yet. However, pressure was already mounting on Senate Republicans to close the tap on the nominee pipeline before Scalia’s death.

So far in 2016, the Senate has confirmed five Obama-nominated judges, including two this past week. There are 11 others who have been approved by the Judiciary Committee and await a floor vote.

Outside groups on both sides of the spectrum were quick to stake out their position.

The conservative legal group Alliance Defending Freedom noted that “it is unlikely that a new justice will be installed prior to the election of our next president.”

The liberal group MoveOn.org attacked McConnell, calling on the majority leader to “retract his shameful, partisan suggestion that the Senate abdicate its responsibility.”

This story was updated to include new details about the Senate confirmation process.