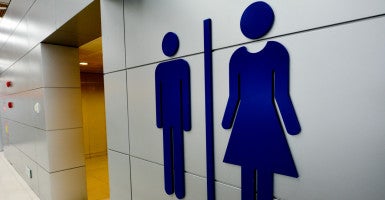 "It is unfortunate that the state Senate chose to ignore the right to privacy that everyone in Washington state has long enjoyed," Joseph Backholm, executive director of the Family Policy Institute of Washington, said. (Photo: Rafael Ben-Ari/Chameleons Eye/Newscom)

An effort to repeal a rule allowing transgender persons to use public bathrooms or locker rooms of their choice was rejected by a one-vote margin in Washington state.

“It is unfortunate that the state Senate chose to ignore the right to privacy that everyone in Washington state has long enjoyed in exchange for making a small portion of the state more comfortable with their bathroom situation,” Joseph Backholm, executive director of the Family Policy Institute of Washington, told The Daily Signal after the vote Wednesday.

The next step may be a ballot initiative to take the issue “straight to the people if there is the will to do so,” Backholm added.

“I hope today’s vote by the Senate makes it clear to transgender people that their elected officials strongly believe that discrimination is not acceptable,” state Sen. Steve Litzow, R-Mercer Island,  said in a prepared statement. He added:

Legislation to create more uncertainty and reduce the rights of any minority does more to divide us than to bring equality. This provides our state with a powerful opportunity to educate more people about our transgender community members and the struggles and discrimination they already face.

The repeal bill,  sponsored by state Sen. Doug Ericksen, R-Ferndale, was opposed by Litzow and two other Republicans—Joe Fain of Auburn and  Andy Hill of Redmond.

S.B. 6443 also would have removed the authority of the Human Rights Commission to “initiate any rule-making procedure that involves the subject of gender segregated facilities.”

“Thank you to the 24 senators who voted to repeal a rule put in place by an unelected board,” Ericksen, the bill’s sponsor, posted on his Facebook page. “This is not about bathrooms, it is about locker rooms and shower rooms. There will be an initiative filed to overturn this rule.”

The Human Rights Commission created the rule as a clarification of existing law, which added transgender persons as a protected class in 2006.

All covered entities shall allow individuals the use of gender-segregated facilities, such as restrooms, locker rooms, dressing rooms, and homeless or emergency shelters, that are consistent with that individual’s gender expression or gender identity.

In such facilities where undressing in the presence of others occurs, covered entities shall allow access to and use of a facility consistent with that individual’s gender expression or gender identity.

An earlier draft of the rule said schools must “assess the use of locker rooms by transgendered students on a case-by-case basis,” AP reported.

The final policy removed an accommodation for public schools and mandated that schools provide transgender students full access to restrooms, locker rooms, and other sex-segregated facilities that correspond to what they consider their gender identity.

“If another person expresses concern or discomfort about a person who uses a facility that is consistent with the person’s gender expression or gender identity, the person expressing discomfort should be directed to a separate or gender-neutral facility, if available,” the final rule says.

As previously reported by The Daily Signal, the state Senate’s Commerce and Labor Committee noted in a summary of public testimony that those who supported repeal said the new rule leaves girls and women vulnerable to sexual predators. Those opposed to repeal argued that it would “allow for harassment and discrimination of transgender persons.”

“Not a single member of the Washington state Senate has suggested transgendered persons are sex predators. But many of us are concerned sex predators will claim to be transgendered,” Sen. Tim Sheldon, D-Potlatch, who supported repeal, said in a press release.

The rule “opens the door, literally, for pedophiles, human traffickers, and sexual assaulters to have unrestricted access to women and girls in showers, locker rooms, and bathrooms,” Angela Connelly, president of the Washington Women’s Network, told The Daily Signal. Connelly added:

The Washington Women’s Network, which supports victims of sexual assault, announced on its Facebook page that it will join the Safe Spaces for Women and Children Rally at the state Capitol on Monday.

A group called Keep Locker Rooms Safe, on a Facebook event page for the rally, asks readers to “share stories of survival and tell our legislature that we will not accept this affront on women’s rights.”

This report has been modified to include a quotation from the bill’s sponsor, Sen. Doug Ericksen.