Obama Administration Once Again Concedes to Putin in Syria 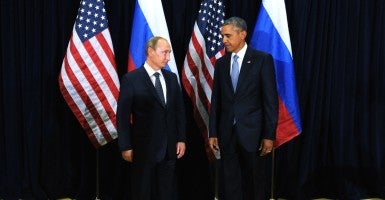 The administration’s passive acceptance of Russia’s growing military intervention in Syria and its naïve accommodation with Moscow’s cynical diplomacy is a major strategic error that will make a bad situation in Syria worse. (Photo: Klimentyev Mikhail/ZUMA Press/Newscom)

Washington has succumbed to another diplomatic mirage: the Russian promise of a limited pause in the intensifying war in Syria.

Secretary of State John Kerry and Russian Foreign Minister Sergei Lavrov announced that they had agreed to an arrangement to “accelerate and expand” deliveries of humanitarian aid to starving civilians in besieged areas, to be followed by a partial “cessation of hostilities” within a week.

The agreement falls far short of an actual cease-fire, in part because it does not include the main belligerents: the Syrian regime and opposition forces.

The cosmetic arrangement gives the illusion of “doing something” to ease the mounting humanitarian catastrophe in Syria. But it only marginally addresses the symptoms of Syria’s bloody conflict, while ignoring one of the root causes: the brutal repression meted out by Bashar Assad’s dictatorship, strongly supported by Russia and Iran.

Incredibly, the “cessation of hostilities” allows Russia to continue bombing and Iran to continue orchestrating a ground offensive that threatens Aleppo, Syria’s largest city, much of which has long been held by rebel forces.

The imminent fall of Aleppo could become a turning point in the conflict and “place Putin at the center of the Syrian chessboard,” according to Fabrice Balanche, a Syrian expert at the Washington Institute for Near East Policy.

Moscow has made it clear that the pause in the bombing will not apply to “terrorist groups,” which it defines expansively to include most of the rebel factions that oppose the Assad regime.

Russian President Vladimir Putin’s war against terrorism is a cynical exercise. Although Russia claims to be fighting ISIS and al-Qaeda’s Nusra Front, U.S. officials say that about 70 percent of Russian air strikes have targeted more moderate Syrian rebel groups, including some supported by the United States.

Moreover, Russian engineers have been dispatched to operate a gas facility in northern Syria controlled by ISIS. The plant was built by a Russian company owned by a billionaire closely associated with Putin. The arrangement apparently was brokered by Russian-Syrian dual national who acted as a subcontractor to build the plant. He also was sanctioned by the U.S. Treasury Department last year for brokering oil sales between ISIS and the Assad regime.

Russia has a poor track record of brokering and complying with cease-fire agreements. There is no reason to believe that this “cessation of hostilities” will last, even if it is actually implemented. Moscow has systematically undermined the Minsk cease-fire in Ukraine and remains in violation of the cease-fire agreement that ended Russia’s 2008 war with Georgia.

The 2013 agreement brokered by Russia to destroy Syria’s illegal chemical weapons arsenal also has been a failure. The Assad regime continued to use chlorine gas dropped in “barrel bombs” from helicopters. But the Obama administration, which once trumpeted the chemical weapons agreement as a diplomatic triumph, has done little about the violations.

Moscow knows that the administration, which has adopted disastrous policies in Syria, is unlikely to react strongly when the latest “agreement” on Syria fails. In the meantime, Russia will exploit the “cessation of hostilities” to consolidate military gains in and around Aleppo.

Two years ago, Russia was a pariah state due to its illegal annexation of Crimea. It has since injected itself into many of the world’s problems, including an aggressive military intervention in Syria.

Russia’s bombing campaign has accelerated the flow of Syrian refugees, which Moscow has exploited to put pressure on Turkey and the European Union. Russia is also boosting ties with Iran and Iraq at the expense of the United States.

The administration’s passive acceptance of Russia’s growing military intervention in Syria and its naïve accommodation of Moscow’s cynical diplomacy are major strategic errors that will make a bad situation in Syria worse.