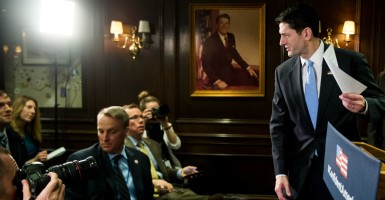 This morning House Speaker Paul Ryan tried to bring the GOP conference to a consensus on the ongoing budget battle inside the party. (Photo: Bill Clark/CQ Roll Call/Newscom)

There wasn’t any arm-twisting or shouting inside a closed-door Republican huddle on Capitol Hill. Instead, House Speaker Paul Ryan brought charts and graphs to plot how he thinks the GOP can move forward if they stomach a budget that increases government spending.

A source inside the room tells The Daily Signal that Ryan laid out “the realities and options” facing the conference. Pass a budget with the higher spending levels already agreed to last October, Ryan said, and Congress has “a chance to do big things in 2017.”

But while conservatives appreciate the Wisconsin speaker’s openness, they’re not sold on the substance of his strategy. As it stands now, the Obama-Boehner budget is a non-starter for members of the House Freedom Caucus.

Conservatives complain that it was muscled through Congress without the support of the majority of Republicans in either the House or the Senate. And they say it’s even more unacceptable now that the national debt exceeds $19 trillion and the Congressional Budget Office projects a budget deficit of $544 billion this year.

Those “numbers are weighing on us,” Rep. Mick Mulvaney, R-S.C., told The Daily Signal. He wants Congress to take the urgency of the national debt into consideration when crafting this year’s budget resolution.

“A success for us,” Mulvaney said, would be “writing a budget that makes the deficit smaller than it would’ve been under the Boehner number.”

Conservatives say the Friday meeting began “a healthy discussion among adults” that will continue inside the Freedom Caucus as Congress breaks for a weeklong recess.

“Paul Ryan is putting forward the proposition that the most important thing is that we do complete a budget,” Rep. Dave Brat, R-Va., told The Daily Signal. “Obviously the content of that budget is the entire debate.”

Some conservative want to scrap the Obama-Boehner deal top-line spending levels altogether. But that’s an idea GOP leadership says they won’t consider. On Friday morning Ryan told the GOP conference that the Senate would quickly scuttle any budget with lower sequester spending levels.

“The result—without question—will be that, once again, the Senate blocks all spending bills,” Ryan said according to the source, “and it ends up with a CR [continuing resolution] or another omni[bus spending bill]. That would be repeating exactly what happened last year.”

Congress has made a habit of using omnibus bills and continuing resolutions to fund the government in recent years. Ryan wants the legislature to appropriate funding for individual agencies through regular order. That is, he wants Congress to do it one at a time with 12 appropriations bills rather than all at once with a single omnibus spending bill.

But at the meeting, Ryan did not seem adamant that the process had to continue. Congress “doesn’t have to do a budget,” the speaker told the GOP conference. “It would be a shame, but the sky won’t fall if we don’t do a budget.”

According to Mulvaney, another idea was warmly considered at the conference: keeping the Obama-Boehner spending levels but pursuing entitlement reform during the appropriations process.

“I’m not saying that’s the plan,” Mulvaney said, “but that’s just one idea that was floated that seemed like it got some positive response, especially among fiscal conservatives.”

Brat, who serves on the House Budget Committee, supports that idea. “Obviously I would like to start from scratch and write an entirely conservative Republican budget,” he said, “but we’ve been put in a pretty tight spot by last year’s history.”

The Virginia Republican said that “you could go forward with the Boehner numbers, but it’d have to be accompanied with a real reduction.” He says that the House Budget Committee could find reforms of mandatory spending that would “offset the Boehner numbers.”

[These are n]ot promises of future entitlement reforms; they’d go into the appropriations process and be real numbers. Right now we can make some substantial moves on behalf of the American people.

At the monthly Conversations with Conservatives event hosted by The Heritage Foundation Thursday, several members balked at the idea of Republicans passing anything that increases spending—even if it included welfare reform.

We’ve been saying for five years, since I’ve been in Congress, that we’re going to balance the budget in 10 years. We’re on year number six right now, and we’re still kicking the can down the road.

In a statement to The Daily Signal, he said he “appreciate the continued conversation” with GOP leadership. Jordan wants Republicans “unify around a conservative budget”—one that “shows we recognize the danger of our debt levels.”

“We need to do what we told the American people we would do when they sent us here,” he said. “We need to stop the out of control spending and prioritize the needs of ordinary Americans.”