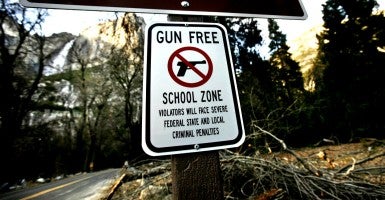 If you have a choice to be in a gun-free zone or a legal-to-carry setting, you are less likely to be the victim of a mass shooting where it is legal to carry guns. (Photo: Eric Paul/ Zamora/MCT/Newscom)

An analysis of mass shootings in the United States since the year 2002 shows that gun-wielding mass killers are more likely to strike where the Second Amendment right to bear arms has been supplanted by “gun-free zone” ordinances, be they federal, local, or specified by the owner of the property. The definition of a mass shooting for the Stanford database is three or more shooting victims injured or killed, not including the shooter. Shootings that are gang- or drug-related are not included.

The dataset includes 153 incidents going back to the beginning of 2002.

Research done at the Heritage Foundation found that fifty-four of the 153 incidents (35 percent) involved a shooter targeting people at random who were not relatives or adversaries of the attempted murderer.

Of the 17 shootings that occurred where citizens could legally carry firearms, 5 (29 percent) were ended when the gunman was stopped or slowed by a gun permit holder’s intervention.

If you have a choice to be in a gun-free zone or a legal-to-carry setting, you are less likely to be the victim of a mass shooting where it is legal to carry guns. All else being equal, if a killer can strike where he is less likely to face lethal law-abiding resistance from ordinary citizens, he will.