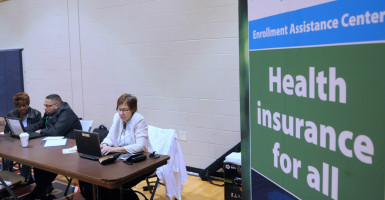 The report notes that the model used to pay and recoup funds "resulted in more than $60 billion, per year, in Medicare fraud." (Photo: Paul Hennessy/ Polaris/Newscom)

The government granted up to $750 million in Obamacare tax credits to 500,000 persons who weren’t eligible, many of whom may have been illegal immigrants, a Senate report says.

Half a million individuals mistakenly received the tax credits because of a lapse in verification of their legal status and a lack of coordination among government agencies, the report determined.

Although they failed to verify citizenship or their legal status, they got the “advanced premium” tax credits under the Affordable Care Act. The taxpayer dollars are awarded on the basis of income to help lower premium costs on Obamacare’s marketplace insurance exchanges.

Sen. Ron Johnson, R-Wis., chairman of the Homeland Security and Governmental Affairs Committee, released findings Monday that focus on the Centers for Medicare and Medicaid Services’ “wasteful practice of distributing cost assistance in the form [of] tax credits to Obamacare enrollees without first verifying the enrollees’ citizenship or lawful presence in the United States.”

The Centers for Medicare and Medicaid Services, part of the Department of Health and Human Services, oversees Obamacare.

A press release from the committee said the report “found that the Internal Revenue Service lacks an effective plan to recoup these improperly awarded funds.”

In this “pay and chase” model used to pay and recoup funds, the Department of the Treasury “pays a portion of an enrollee’s premium without confirming whether the enrollee is eligible for such a payment, and then ‘chases’ after the enrollee to recover the payment if is later determined that the enrollee was ineligible,” the report states.

The Centers for Medicare and Medicaid Services, or CMS, has used this model to pay Medicare claims for 45 years. The result, according to the report, was “more than $60 billion, per year, in Medicare fraud.” It adds:

Last March, Johnson asked Health and Human Services Secretary Sylvia Burwell about the processes for eligibility verification and recouping of improper payments. He also wrote to the IRS.

“While CMS and the IRS must improve their coordination to ensure the administration recoups the $750 million improperly awarded,” the report says, “they also must work to prevent future improper spending of this type.”

Republican staff calculated the findings based on data provided by the agencies as of last June. CMS confirmed to Fox News Channel that 471,000 customers with Obamacare coverage last year failed to prove legal status.

“Lack of verification does not mean an individual is ineligible for financial assistance, but only that a marketplace did not receive sufficient information to verify eligibility in the time period outlined in the law,” agency spokesman Aaron Albright told Fox.

To test the accuracy of the verification process for the Obamacare insurance exchanges, the Government Accountability Office submitted applications from 12 phony applicants, over the phone and online, during the first enrollment period from October 2013 to April 2014.

The new Senate committee report notes that 11 of the 12 applicants were able to obtain subsidized health coverage and received a total of about $30,000 in advanced premium tax credits. The report states:

For seven of the 11 successful applicants, GAO did not submit all required verification documentation, but the exchanges nonetheless provided subsidized coverage. The exchanges automatically re-enrolled all 11 fictitious enrollees for 2015 coverage. Eventually, the exchanges terminated coverage for six of the enrollees based on failure to provide documentation of eligibility. However, for five of the six terminations, GAO obtained coverage reinstatement and increases in advanced premium tax credit amounts.

In January, President Barack Obama vetoed a bill that would have repealed much of Obamacare. The House failed to override the veto.