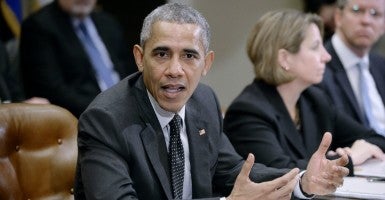 House Speaker Paul Ryan, R-Wis., snarkily tweeted a survey asking what the mountain pictured on the cover of Obama’s budget proposal symbolized. Options: debt, regulations, taxes, or all of the above.

A record-breaking budget package, the Obama plan would boost government spending by 4.9 percent while increasing spending by $2.5 trillion over the next decade. It also would impose $3.4 trillion in tax increases, leveled mostly on wealthy Americans.

Congress likely will take a pass on the president’s legacy package. It’s a recommendation, not a mandate. And in the final year of Obama’s eight-year tenure, many on Capitol Hill consider it more of a political move and less of serious policy proposal.

But while Ryan’s Twitter poll continues, criticism from the Republican caucus mounts.

Obama called the package “a roadmap to a future that embodies America’s values and aspirations.” Republican leadership in the House, though, already had labeled it “unserious.”

Majority Leader Kevin McCarthy, R-Calif., complained that the proposal does nothing “to overcome the biggest challenges of our time” or make “the government live within its means.”

Obama’s spending plan for fiscal year 2017 comes as conservatives warn of mounting national debt that now totals $19 trillion. In response, Republican leadership has promised to deliver an alternative plan that will balance the budget.

One member of the House Budget Committee was struck more by the document’s cover art than the suggested spending policy.

“There’s a fair amount of irony when you have what looks to be Mount Denali on the front,” Rep. Mark Sanford, R-S.C., told The Daily Signal. “There’s a degree of intentional or unintentional debt symbolism.”

Other than that, there’s “not a lot” worth evaluating, Sanford said. He predicts that the document “won’t be taken seriously” among House Republicans and “won’t have much bearing” on any committee debates.

“It does everything exactly the opposite we teach kids in Economics 101 if you want to grow your economy,” Rep. David Brat, R-Va., told The Daily Signal.

Unfortunately, they’re remarkably the same. Obama’s deficit number is $616 billion, and under the Boehner budget it’s $544 billion. Both add over half a trillion [dollars] to the deficit.

In the Senate, the reception for the White House’s plan wasn’t much warmer.

In a press release, Sen. David Perdue, R-Ga., quipped that “the only positive thing about this budget request is that it’s the last one we will receive from President Obama.”

The Georgia freshman recommended a simple budget tool: “Every elected official in Washington needs to start saying four simple words Americans use all the time: ‘We cannot afford it.’”