Maine Required Childless Adults to Work to Get Food Stamps. Here’s What Happened. 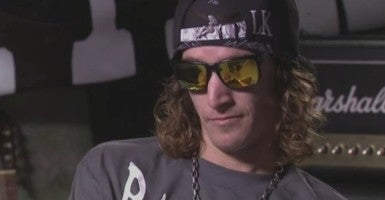 Jason Greenslate, a Californian who reported that he spends his time surfing and playing in his rock band, all the while receiving benefits from the food stamp program. (Photo: Fox News / Screenshot)

The most rapid growth in the food stamp caseload in recent years has been among able-bodied adults without dependents (ABAWDs). These are work-capable adult recipients between the ages of 18 and 49 who do not have children or other dependents to support.

The Need for Work Requirements

Since 2008, the food stamp caseload of adults without dependents who are able-bodied has more than doubled nationally, swelling from nearly 2 million recipients in 2008 to around 5 million today. They gained notoriety when Fox News aired a documentary on food stamps featuring 29-year-old Jason Greenslate, a Californian who reported that he spends his time surfing and playing in his rock band, all the while receiving benefits from the food stamp program.

Job openings for lower-skill workers are abundant in Maine, and for those ABAWD recipients who cannot find immediate employment, Maine offers both training and community service slots. But despite vigorous outreach efforts by the government to encourage participation, most childless adult recipients in Maine refused to participate in training or even to perform community service for six hours per week. When ABAWD recipients refused to participate, their food stamp benefits ceased.

In the first three months after Maine’s work policy went into effect, its caseload of able-bodied adults without dependents plummeted by 80 percent, falling from 13,332 recipients in Dec. 2014 to 2,678 in March 2015.

This rapid drop in welfare dependence has a historical precedent: When work requirements were established in the Aid to Families with Dependent Children (AFDC) program in the 1990s, nationwide caseloads dropped by almost as much, albeit over a few years rather than a few months.

Government should aid those in need, but welfare should not be a one-way handout.

The Maine food stamp work requirement is sound public policy. Government should aid those in need, but welfare should not be a one-way handout. Nearly nine out of ten Americans believe that able-bodied, non-elderly adults who receive cash, food, or housing assistance from the government should be required to work or prepare for work as a condition of receiving aid.

LePage’s reform puts the public’s convictions into action. The Maine reforms recognize that giving welfare to those who refuse to take steps to help themselves is unfair to taxpayers and fosters a harmful dependence among beneficiaries.

The Maine work requirement also reduces fraud. The most common type of fraud in welfare involves “off the books” employment. In food stamps, as in other welfare programs, benefits go down as earnings rise.

But “off the books” employment is rarely reported to the welfare office; hiding earnings enables a recipient to “double-dip,” getting full welfare benefits he is ineligible to receive while simultaneously receiving earnings from an unreported job.

A work requirement substantially reduces welfare fraud because insisting a recipient be in the welfare office periodically interferes with holding a hidden job. Recipients cannot be in two places at once. Faced with a work requirement, many recipients with hidden jobs simply leave the rolls. No doubt, a significant part of the rapid caseload decline in Maine involves flushing fraudulent double-dippers out of the welfare system.

Government data show that many adults without children on food stamps use their own funds counter-productively. Over half of able-bodied adults without dependents regularly smoke tobacco; those who smoke consume on average 19 packs of cigarettes per month at an estimated monthly cost of $111. These individuals rely on the taxpayers to pay for their food while they spend their own money on cigarettes.

The federal government should establish work requirements similar to Maine’s for the 4.7 million able-bodied adults without dependents currently receiving food stamps nationwide. If the caseload drops at the same rate it did in Maine (which is very likely), taxpayer savings would be over $8.4 billion per year. Further reforms could bring the savings to $9.7 billion per year: around $100 per year for every individual currently paying federal income tax.

Requiring work for able-bodied welfare recipients was a key element of President Ronald Reagan’s welfare philosophy. It was the foundation of the successful welfare reform in the 1990s. But the idea of work in welfare has fallen by the wayside. It is time to reanimate the principle.