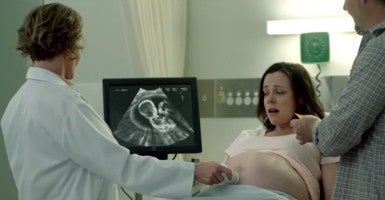 This couple's baby is lunging towards his dad's Doritos. (Photo: screenshot of Doritos' Super Bowl ad)

A room with an ultrasound may seem like an unlikely setting for a chips commercial. But in an ad aired during the Super Bowl, Doritos cleverly suggested you don’t need to be outside the womb to have a serious chips craving.

The ad showed an oblivious dad eating Doritos at his wife’s ultrasound. His wife is annoyed; their baby, on the other hand, is a fan—first moving toward the chips, and then, in a comedic ending, actually being born, whooshing out of the womb to get a chip.

Not everyone was laughing. NARAL Pro-Choice America tweeted its outrage that the Doritos ad was “using #antichoice tactic of humanizing fetuses.”

Ah, yes, the horror. It’s much easier to talk about abortion when you’re suggesting what will be disposed of is a “clump of cells” or similar language rather than face the reality that as early as five to eight weeks on, the baby is developing her nose, mouth, and ears.

But the fact is that—no doubt partially due to ultrasound technology—moms and dads are now developing relationships with their children long before the due date, sometimes even announcing both name and sex to friends and family before the baby is born.

In the case of the Doritos ad, the creator, Australian Peter Carstairs, told The Huffington Post Australia that he got the idea from watching his own son Freddie’s ultrasound. Freddie’s 3D ultrasound gets its own cameo in the ad—it’s the original footage of the baby before the animated, chip-seeking version shows up.

“I was interested in this collective thought,” Carstairs said, “that when you go into the ultrasound suite, mum is always incredibly connected to the baby and going through this life affirming moment while dad, particularly in Australia, is usually in the corner watching the footy or on his iPad—so that was the humor we wanted to find.”

Yup, that definitely sounds like the thinking of a political strategist—not.

And that’s what’s frightening to NARAL and other pro-abortion advocates: The day is over when people waited until birth to get to know and love their little ones. From sharing ultrasound snaps to 3D videos, parents are proudly chronicling the in utero development of their kids, just as they will go on to chronicle their toddler and school-age years.

It’s not about politics. It’s just about sharing your kids’ progress.

That’s becoming increasingly obvious. Outlets as mainstream as NBC’s “Today” and People have highlighted ultrasounds, with Today.com writing about a “baby [who] gives parents a cheerful thumbs up in ultrasound photo” and People last year highlighting “how one blind woman was able to share in the awe of that first ultrasound moment,” showcasing a diapers ad that showed a woman getting a 3D printed version of her ultrasound.

But, of course, the increasing awareness that these unborn babies are growing and developing does raise questions about current abortion policy in the United States. Most legalized abortion advocates have been adamant that abortion must be legal to the end of the pregnancy, even going so far as to support partial-birth abortion.

That’s not the international norm—in fact, the U.S. is one of only seven countries where elective abortions after 20 weeks are legal.

Polling suggests that Americans don’t agree that abortion should be legal for the entire length of the pregnancy. According to a January Marist poll done for the Catholic organization Knights of Columbus, only 12 percent think abortion should be legal during an entire pregnancy. In contrast, 61 percent of Americans back banning abortions after 20 weeks, unless the mother’s life is in danger, while 81 percent support some abortion restrictions.

Newer laws are beginning to reflect Americans’ actual views. Several states have banned abortions after 20 weeks in most cases (although these bans have been going through the court system). And that’s not all. Finally, we may be reaching a point where the “no abortion restrictions” message of pro-abortion advocates is being recognized for the extremism it is.

That Doritos Super Bowl ad was a funny take on a real experience many parents face: meeting their kid via ultrasound. And it was true to unborn babies’ experience, too: Ask a pregnant woman what foods her baby likes and dislikes, and she probably has some sense. In fact, NPR reported in 2011 that babies’ tastes are influenced by what their mom ate while they were pregnant, noting that “if you eat broccoli while you’re pregnant, there’s a much better chance your baby will like broccoli.”

The Doritos Super Bowl ad worked not because it bolstered a political viewpoint. It worked because it resonated—and that should terrify pro-abortion advocates.