US Conducts Freedom of Navigation Operation in South China Sea 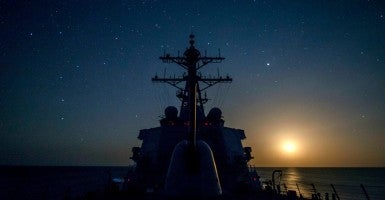 Some 90 days after the last attempt at conducting a freedom of navigation operation in the South China Sea, the American destroyer USS Curtis Wilbur sailed within 12 nautical miles of Triton Island in the Paracels. The central point of this mission was to sail near the islands without prior notification.

Unlike the October case, where the USS Lassen approached the artificial island the Chinese are building on Subi Reef (which does not enjoy a 12 nautical mile territorial water zone, because it is an artificial island built atop a reef), Triton island is an actual island, and therefore entitled to a 12 nautical mile territorial water zone. Therefore, while nations have a right of “innocent passage” within 12 nautical miles of the island, they are enjoined from operating military equipment (e.g., radars or helicopters), and are expected to transit any such waters as rapidly as possible.

The American transit, in this case, appears intended to underscore that no prior notification is necessary for such “innocent passage,” so long as it is undertaken expeditiously in a straight line. Reminding various states, including the People’s Republic of China, of this fact is useful, but does not address the larger point that China seeks to establish new precedents, by building entire islands atop reefs and then claiming territorial sea and exclusive economic zones around them.

To its credit, however, the decision to hold this freedom of navigation operation in the Paracels does constitute an important signal, one which has been little remarked upon in the public discussions.

The Paracels are often seen as Chinese territory, despite the disputed status between Hanoi and Beijing. The Chinese took these islands from the South Vietnamese in 1974 (earning Saigon a scathing condemnation from Hanoi at the time). While the Vietnamese constantly invoke the Paracels as an example of Chinese territorial aggrandizement, it is unclear how many of Vietnam’s neighbors, if any, are likely to support Hanoi, given China’s control of the island array for some 40 years.

The administration’s choice of the Paracels to conduct its first freedom of navigation operation of 2016 is therefore one that is likely to be seen by Hanoi as at least implicitly supporting their position, whether it was explicitly intended as such or not. Conversely, Beijing is likely to see it as extending the American challenge, both in terms of freedom of navigation but also in terms of implicit questions of sovereignty, beyond just the South Sand islands (translation of Nansha, the Chinese name for Spratlys) to now the West Sand (translation of Xisha, the Chinese name for the Paracels). If the United States is smart, it may well conduct the next challenge in the Middle Sand island group (translation of Zhongsha, the Chinese name for Macclesfield bank and Scarborough Shoal), which some expect will be the next site of major Chinese island construction efforts.

(In case anyone is wondering, East Sand (Dongsha) is the Chinese name for the Pratas islands, currently under the control of the Republic of China/Taiwan.)

It is, by the way, no accident that the administrative city on Hainan responsible for all of this South China Sea development is Sansha City, translating as “Three Sands City.” Sansha City was elevated in 2012 to “prefecture” level from “county level,” reflecting the growth in importance accorded its subordinate territories of the Spratlys, Paracels, and Macclesfield Bank/Scarborough Shoal.